Preview: the new Audi A4 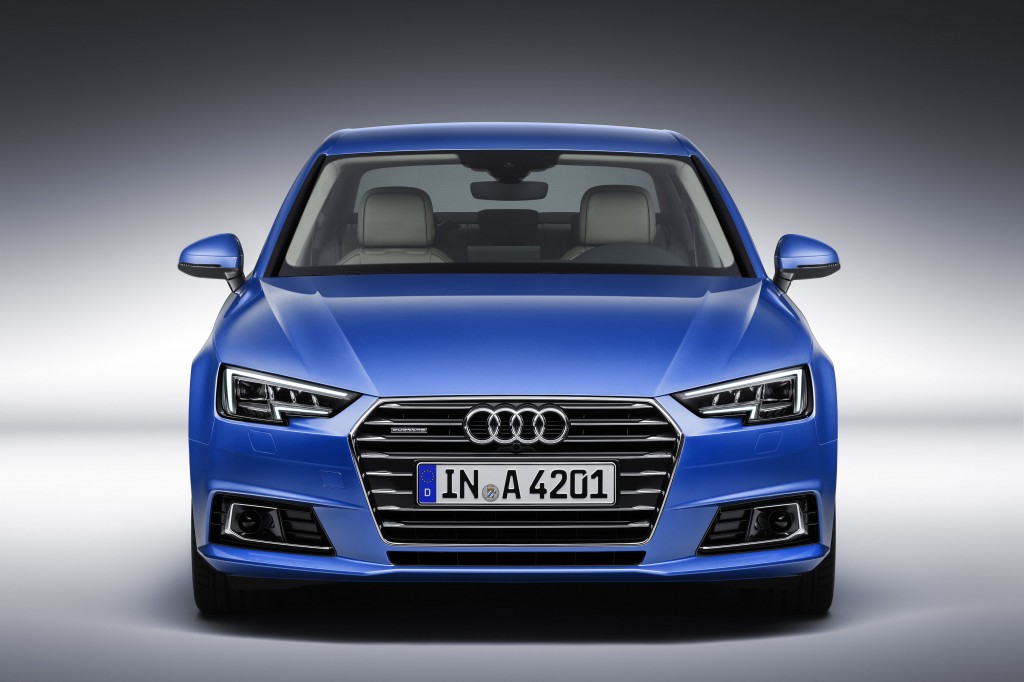 The next-generation Audi A4 has been unveiled. And, as you might expect, it’s a pretty amazing synthesis of technology and design. All of the technology in the company’s arsenal has been applied to its best-selling family – so that it yet again defines the benchmark in the segment. It will be summer 2016 before you see them in our showrooms, but we thought we’d give you a preview now.

The new A4, despite being even sharper-suited than before, has far and away the best drag coefficient in its class at 0.23. Driver assistance systems and infotainment are from a class above, while a new generation of four-cylinder TFSI engines with newly developed combustion methods sets benchmarks in fuel consumption, emissions and performance for four-cylinder gasoline engines.

At 4.73 m long and with a wheelbase of 2.82 m, the new Audi A4 has a confident stance on the road, enhanced by a prominent horizontal line on the front and rear to emphasize the car’s width. The sharp but flowing design effortlessly communicates the sporty elegance of the brand, and incorporates its signature elements: the single-frame grille is wide and low, while the optional LED headlights make technology one of the A4’s visual trademarks. 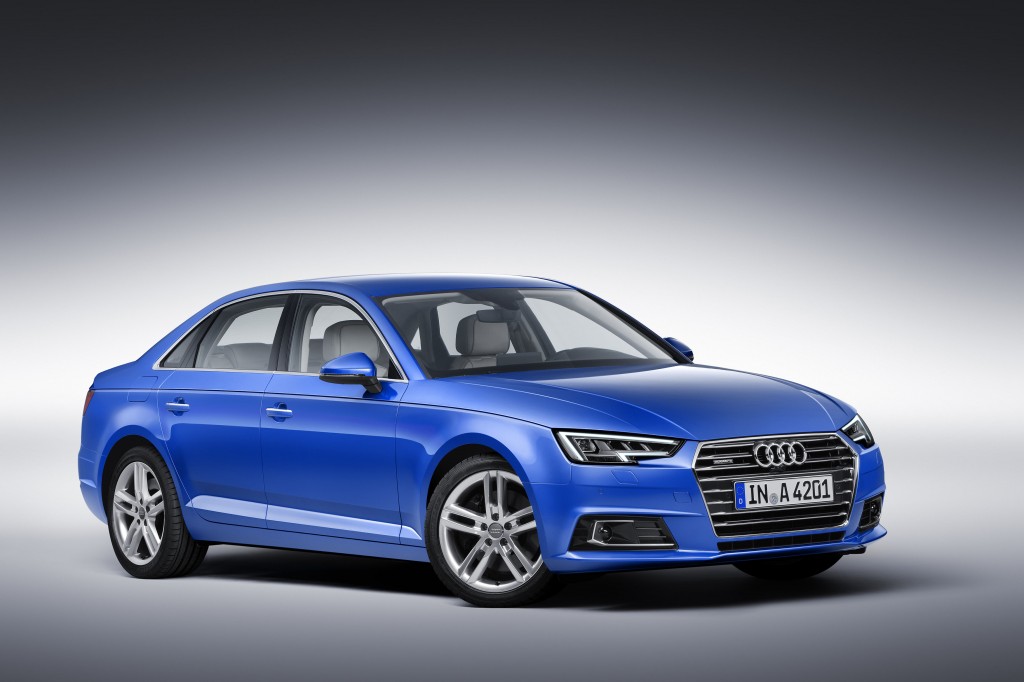 Despite the larger dimensions, weight has been reduced significantly – by up to 120 kg, depending on the engine. The body of the new A4 is one of the lightest in its class, thanks to an intelligent material mix and lightweight construction.

Inside, despite the lighter weight, the new A4 leads in its class in refinement and noise levels. All occupants enjoy generous space, while the smooth lines emphasize the width of the interior. The front of the dashboard features a broad band of air outlets and a large decorative surface. While at night, optional discreet contour lighting illuminates the doors and the centre console. 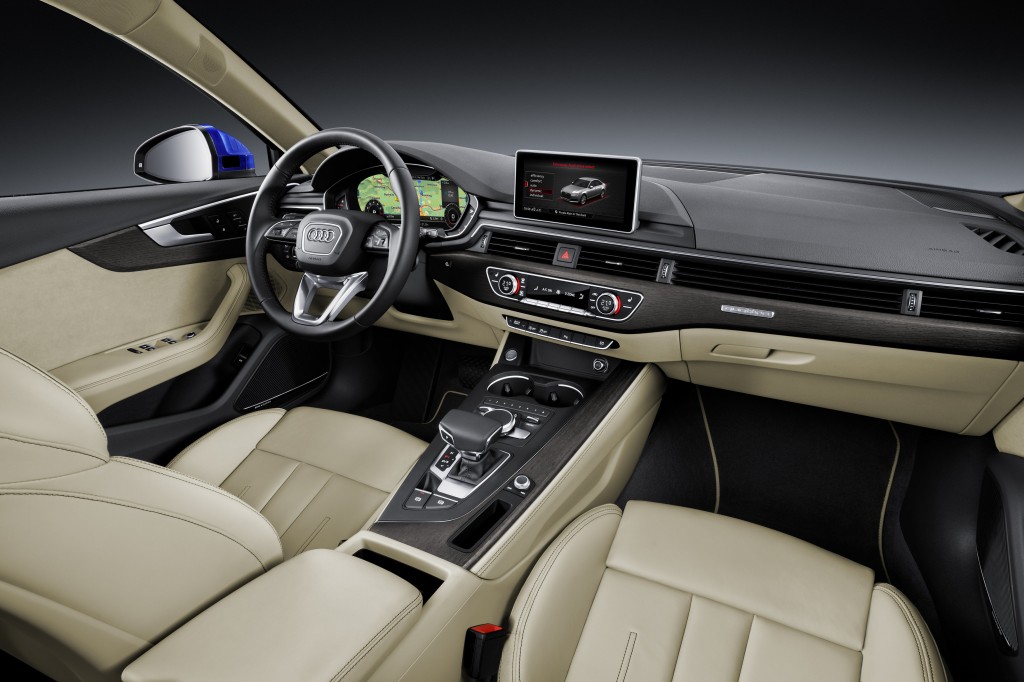 There is also an abundance of intelligent technologies, the use of which is even more intuitive with the new Audi MMI display and control concept. Technological highlights of the new A4 include the Audi virtual cockpit, the matrix LED headlights, the Audi smartphone interface, Bang & Olufsen Sound System with 3D sound, Audi phone box with wireless charging, head-up display, and new driver assistance systems and Audi connect services.

The optional Audi virtual cockpit, a fully-digital dashboard, features a 12.3-inch LCD screen like on the new Q7 and TT, which displays the most important information in brilliant high-resolution graphics, with great detail and sophisticated effects.

The MMI control concept in the centre console is also newly -designed feature and acts as the main control element. The top infotainment system, MMI Navigation plus with MMI touch (and a large 8.3-inch monitor), has a touchpad in the rotary controller to zoom in and out and to enter characters using gestures. The MMI control logic is similar to that of a smartphone and includes an intelligent free-text search function. The new, more natural, voice-control system also understands input in normal everyday language. 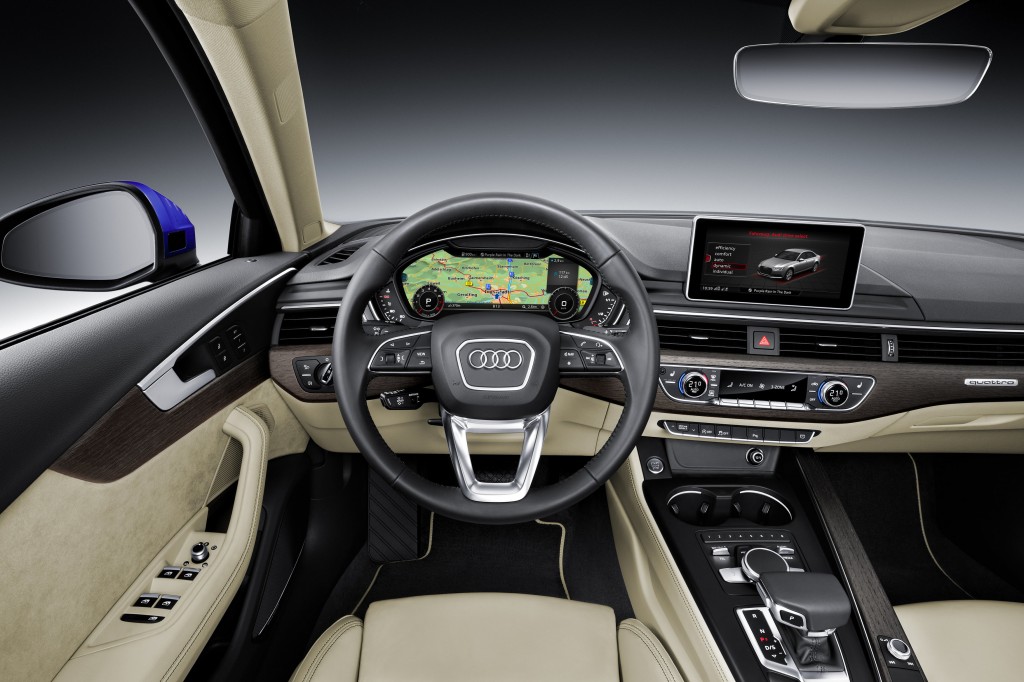 If customers order a car with MMI Navigation plus, they automatically receive the Audi connect hardware module, which connects the A4 and A4 Avant with the Internet via a high-speed LTE network. Passengers can surf the Internet and send and receive e-mail with their mobile devices via a Wi-Fi hotspot while the driver can use the tailored services of Audi connect.

The Audi smartphone interface is a new feature. It integrates iOS and Android mobile phones into MMI using Apple CarPlay and Google Play. The Audi phone box connects smartphones to the on-board antenna and charges them inductively. For discerning hi-fi fans, the Bang & Olufsen Sound System with innovative 3D sound is available, which introduces the additional dimension of height.

Powerful and at the same time efficient. The 2.0L TFSI engine, benchmarked by the A4’s owned competitors, is now better than ever. With this next generation, horsepower and torque will increase dramatically. Efficiency ensues with an available lower output 2.0 TFSI engine, delivering improved fuel economy. Models fitted with quattro will utilize the higher output TFSI engine while FWD models will receive the lower, more efficient output powertrain.

For the first time in Canada, Audi will launch the A4 with a 2.0 TDI engine. This powertrain will be available with both quattro and FWD drivetrains, providing the optimal mix of efficiency and performance. All engines will come available with Start/Stop technology, adding a new level of fuel savings for customers. The driving experience is further enhanced by mating all engines to a new 7 speed S tronic transmission providing remarkable gear shift performance. Specifications for powertrain specific to North America will be released at a later date. 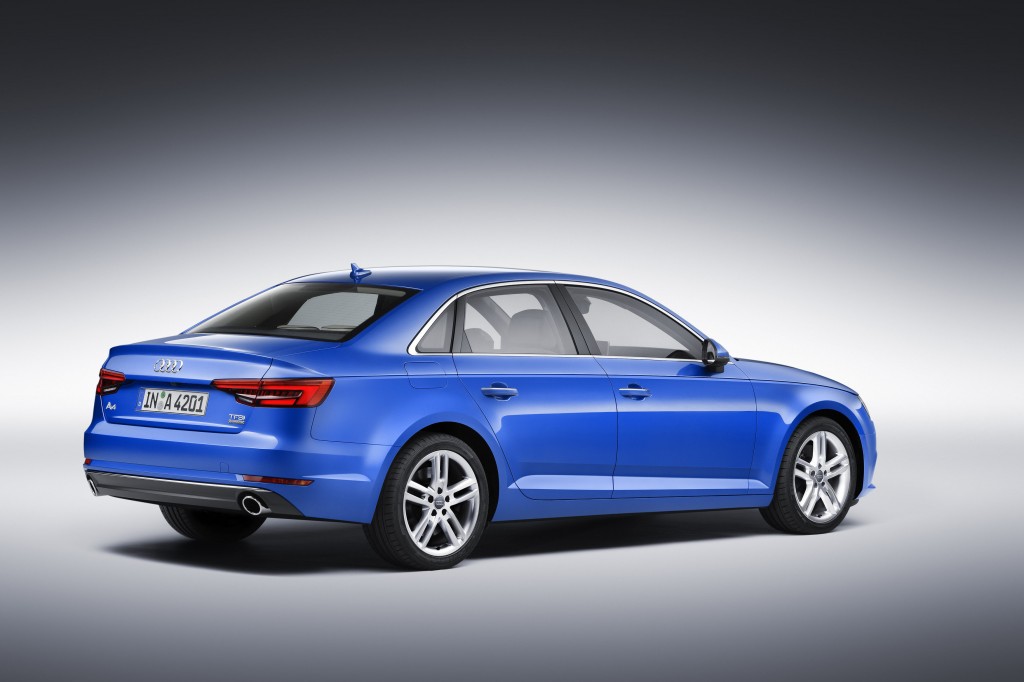 The handling of new A4 makes a great leap forward: sporty and performance-oriented, but with a focus on comfort at the same time. The suspension and steering filter out disturbances such as uneven road surfaces, but communicate important information such as increases in lateral forces. This performance is delivered by redeveloped five-link axles and electromechanical power steering, which lay the foundation for dynamic handling and first-class ride comfort. Additional options are dynamic steering, which varies its ratio according to the car’s speed and the steering angle, and suspension with adjustable shock absorbers.

All of the versions of the new models include the Audi pre sense city safety system as standard equipment. At speeds of up to 85 km/h, the system scans the road for other vehicles and pedestrians using a windshield-mounted front camera with a range of up to 100 m. If there is the threat of a collision, the driver receives a series of warnings, and if necessary the car starts to apply the brakes. At speeds up to 40 km/h, it can fully prevent accidents within the system limits. At higher speeds up to 85 km/h, warnings and brake intervention can reduce the impact velocity.

Another standard system in the new A4 is attention assist, a component of the driver information system. It analyses driver behavior and issues a warning when it detects that the driver is becoming inattentive. The adjustable speed limiter, a standard feature, can be set to a particular speed ranging from 30 to 250 km/h – a very helpful tool for maintaining speed within city limits, in construction areas, and so on. 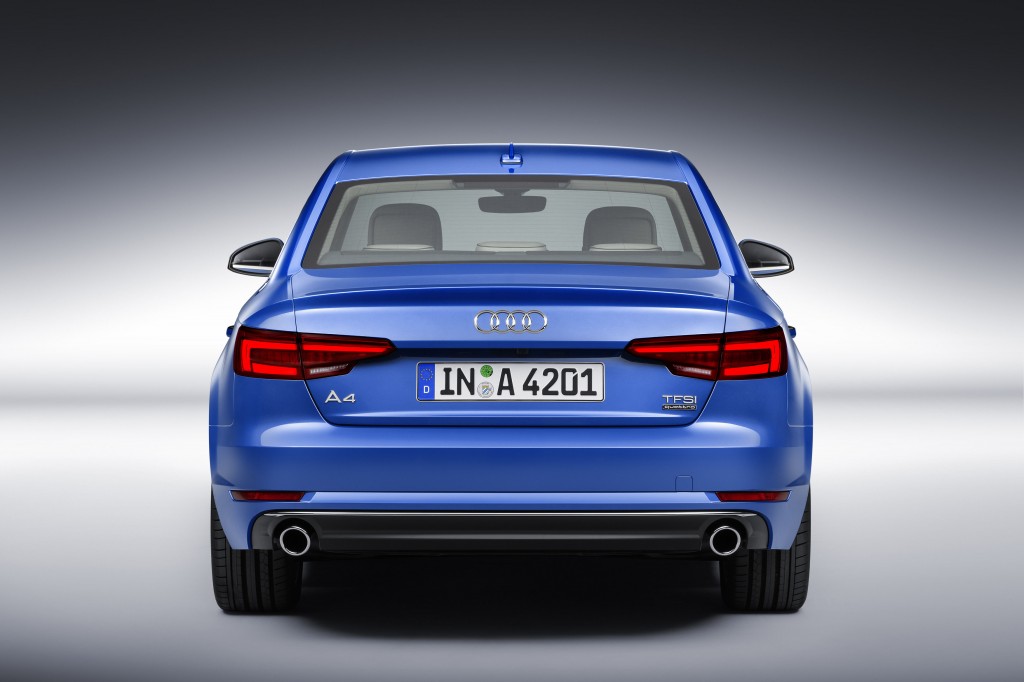 Indeed, a fully equipped new A4 has some 90 control units on board, many of which exchange data with each other. This kind of tight-knit interaction, especially among the driver assistance systems, would not be possible without a brand-new approach to the car’s electronic architecture. The new FlexRay bus connects several control units with each other and guarantees extremely rapid and secure data transfer. The most important components are the engine, the automatic transmission, the central chassis control unit, electronic stabilization control (ESC), the power steering control unit, the adaptive cruise control, the video camera and the safety computer which steers the safety systems.