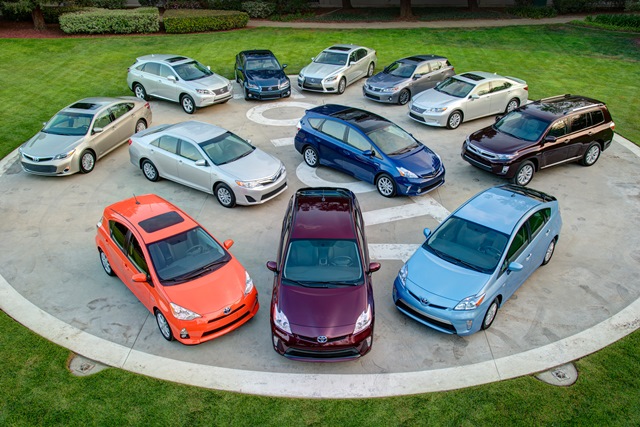 Including hybrid vehicles launched this year, Toyota will introduce a total of 15 new hybrids globally through 2015. Hybrids launched this year comprise the Voxy Hybrid and Noah Hybrid in Japan only (January), and the Lexus NX 300h (July). This month Toyota will introduce the Lexus RC 300h. Toyota plans to continue expanding its hybrid lineup and increase the number of countries and regions where it sells hybrid vehicles.

Today, Toyota sells 27 different hybrid passenger car models and one plug-in hybrid model in more than 90 countries and regions. In Canada, Toyota and Lexus offer 11 hybrid models and one plug-in model. In fact, more than three quarters of all the hybrids sold in Canada since 2000 came from Toyota and Lexus. In August, Toyota Canada achieved the milestone of selling 100,000 hybrids in Canada.

By achieving global mass-market appeal, Toyota hybrids have created a significant positive impact in gasoline consumed and emissions generated by driving. To date, Toyota hybrid vehicles have resulted in approximately 49 million fewer tons* of CO2 emissions and saved 4.75B gallons of gasoline than would have been emitted or used by gasoline-powered vehicles of similar size and driving performance. In Canada alone, Toyota and Lexus hybrids have saved Canadians almost 260 million litres of fuel and helped avoid over 600,000 tonnes of C02 emissions.

Although Toyota provides consumers a portfolio of options, including pure electrics and a fuel cell that will go in sale in summer 2015, hybrids will remain its core technology. Toyota therefore plans to continue working to enhance performance, reduce costs and expand its product lineup to create vehicles popular with consumers.