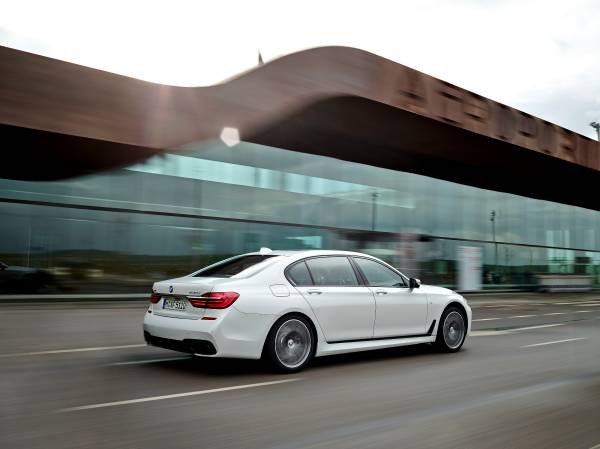 The all-new BMW 7 Series, the sixth generation of the Bavarian brand’s flagship, will once again set the standard for luxury and performance, delivering the highest level of driving refinement in the premium class. Set to arrive at Pfaff BMW in, respectively, fall of 2015 for the 750i xDrive and 750Li xDrive models, and spring of 2016 for the 740Li xDrive model, it features BMW’s newest groundbreaking technologies such as Gesture Control, Wireless Charging and the new Display Key, as well as setting a new benchmark in lightweight design, driving dynamics, comfort, intelligent connectivity and intuitive operation.

The extensive use of carbon-fiber-reinforced plastic (CFRP) in the structure of the passenger cell of the new 7 Series, and the strategic application of lightweight design, reduce weight and increase both the overall torsion strength and bending stiffness. Indeed, the new 7 Series is 86 kg lighter than its predecessor thanks to its groundbreaking Carbon Core and the use of ultra-high-tensile steels and aluminum. Based on technology transferred from BMW i car development, the Carbon Core makes the new 7 Series the first vehicle in which mass-produced CFRP is used in combination with steel and aluminum.

The engine line-up at launch is spearheaded by the 750i xDrive and its powerful V8 engine. It features a 4.4-litre displacement and BMW TwinPower Turbo technology with TwinScroll turbochargers. Engine efficiency was increased with an increase in the compression ratio and the latest generation of VALVETRONIC and Double-VANOS technology. Overall, the efficiency factor of the 445 hp engine has been greatly improved.

The new V8 engine is teamed up with the latest version of the intelligent all-wheel-drive system in the all-new 750i xDrive. The fully variable, electronically controlled power split between front and rear wheels enhances traction and stability as well as the handling dynamics in corners. As part of the xDrive system’s ongoing development, the transfer case has been made more efficient, thanks in part to an optimized oil supply.

Coming later in the 740i is an inline-six from BMW’s latest generation of engines. The 3.0-litre gasoline unit produces an output of 320 hp, and has a crankcase, cylinder head and oil sump all made from aluminum. The TwinScroll turbocharger features an indirect system of charge air cooling that is incorporated into the intake manifold and works in unison with High Precision Direct Injection, the very latest version of VALVETRONIC and Double-VANOS variable camshaft timing.

A plug-in hybrid 740e xDrive will join the model lineup in 2016. BMW eDrive powertrain technology intelligently controls interaction between a 2.0-liter gasoline engine with BMW TwinPower Turbo technology and an electric drive unit integrated into the eight-speed Steptronic transmission, endowing the 740e xDrive with dynamic acceleration on the one hand and noticeably higher fuel efficiency with lower emissions figures in everyday driving.

Energy for the electric motor is drawn from a lithium-ion high-voltage battery housed underneath the rear seat. It can be recharged by connecting to any standard domestic power socket, a BMW i Wallbox or a public charging station. The eDrive button on the center console enables the driver to adjust the hybrid drive’s operating mode. In the AUTO eDrive basic setting, the engine’s power is boosted to notable effect by the electric drive when accelerating. With the MAX eDrive mode engaged, the 740e xDrive is able to run purely on electric power, meaning zero local emissions at speeds of up to 120 km/h mph for a maximum range of 37 km.

Inside the carbon core is an elegant interior with luxurious workmanship. The iDrive operating system is now available with touch-screen technology offered in conjunction with the standard navigation system. Operating the iDrive has become easier via the touch screen technology, and voice command and actual button selection is also available.

The iDrive system also works in conjunction with standard Gesture Control, which is being premiered in the new 7 Series. Pre-selected hand movements in the vicinity of the center console allow 3D sensors to register and fulfill requested actions. Gestures to adjust the audio volume control, accept or reject incoming phone calls can be easily executed. There is also a configurable gesture whose associated function can be customized from a selection of possible functions, such as navigation to the home address or deactivation of the screen. Gesture Control can be used as an alternative to conventional means of operation without the need for separate activation. The availability of this control method is indicated in applicable situations by a corresponding icon in the Control Display.

The all-new BMW 750i models will be offered in both short and long wheelbase xDrive versions (the 740 will only be offered as a 740Li xDrive model) . At 525 centimeters in length, 112 centimeters in width and 148 centimeters in height, the new 750Li xDrive is the roomiest Sedan the brand has ever built and features class leading rear seat legroom.