Pfaff Auto | Blog | A Weekend with the Cayman GTS

A Weekend with the Cayman GTS 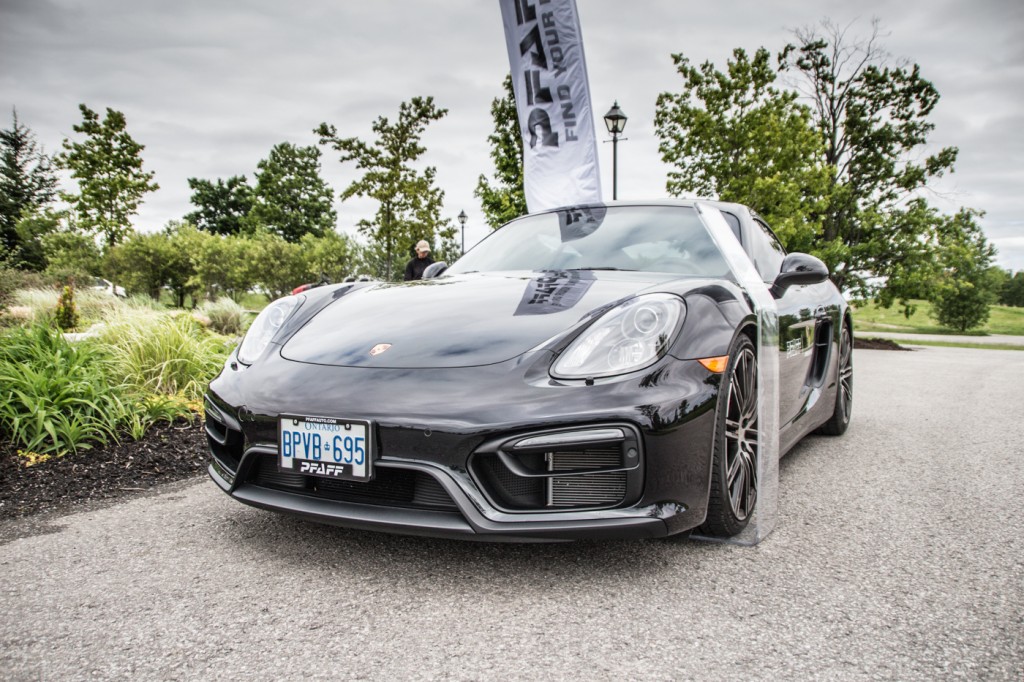 I smiled when my colleagues laughed when I chose a Porsche Cayman GTS to drive while pacing the Hero Ride last month. Some of them, of course, thought I was lucky. The rest laughed. “That’s going to suck,” they said.

Why? Well, driving a pace car for a bike ride isn’t the same as tackling a winding road flat-out: six and a half hours in a 340-horsepower sports car doing an average of about 30 km/h was probably going to be pretty brutal. But hey, I’m a glutton for punishment. As it turns out, the Cayman proved us all wrong and not once did I find myself wishing for a massage – or a different car.

The Hero Ride is an annual event that aims to raise money for extremely worthy causes – Sick Kids and Bridgepoint Active Health Care to name a couple. Brave souls mount their road bikes and set off on a 125km route from King City to Blue Mountain and back again. It’s a 250km total ride fueled by sweat, water, and the passion for making a difference. Pfaff Porsche has been a partner since the beginning, and this year 5 of our guys joined in for the ride. 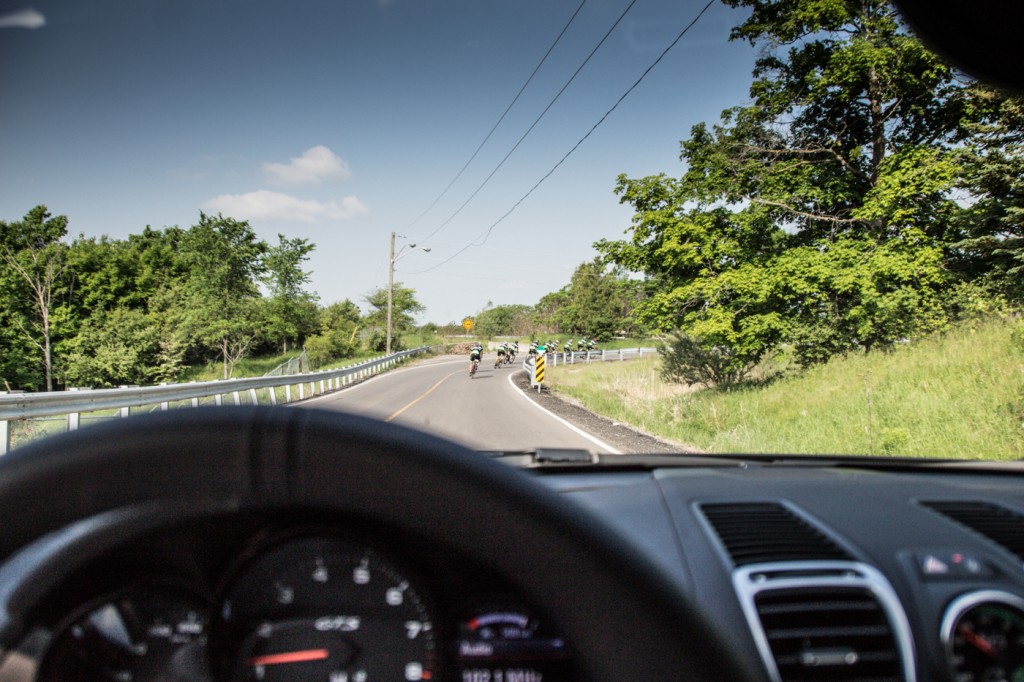 In between the groups of riders are pace cars, one of which was my Cayman GTS – currently the most powerful version of the mid-engine, rear-wheel drive Porsche sports car until the Cayman GT4 goes on sale later this year. It’s a touch smaller than the iconic 911, and shares much of its styling and performance gear with the Boxster. The GTS package takes the whole car to a different level, bringing 15 more horsepower, a beautiful alcantara interior, and one of the best-sounding exhaust notes I’ve ever heard (more on that later).

So why would I pick a hardened, mid-engine Porsche for a long, slow drive behind a group of cyclists, when the more obvious choice would have been a Panamera or Cayenne? Simply put, I love the Cayman. It’s my favourite Porsche by a long shot; it’s pretty; just fast enough; and a blast to drive. I’d take an uncomfortable ride in a car I love over a comfortable ride in one I don’t. 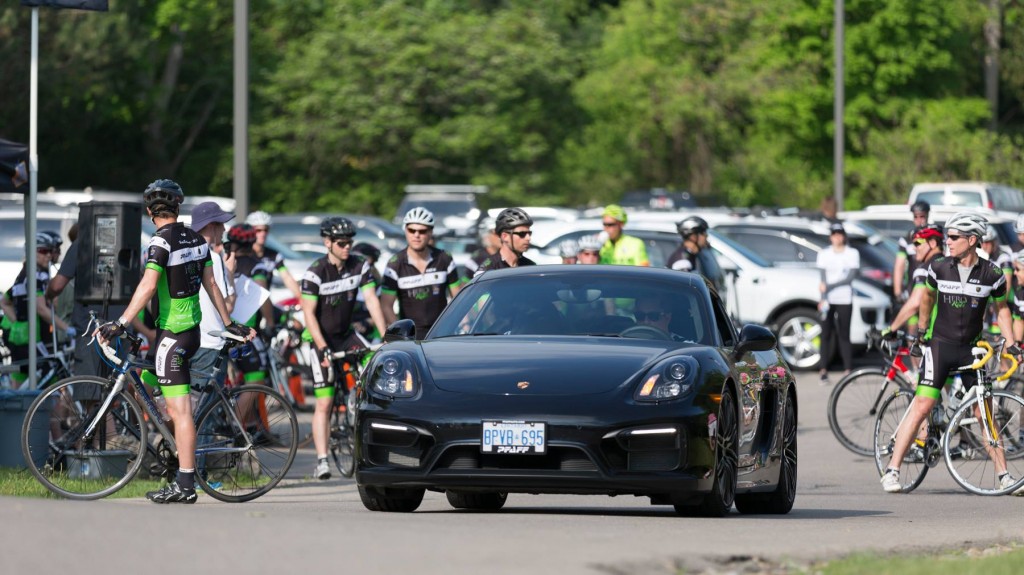 So I set out to this event with the mindset that the hours of uncomfortable pacing would be offset by the brief stints of speed setting off from stop signs. But you know what, it wasn’t uncomfortable at all. Here’s what I noticed.

Just go and sit in a Cayman; I think you’ll be surprised. It’s not your living room recliner by any means, but for a sports car, it’s about as good as it gets. My GTS had lots of toys, including ventilated seats with 18-way power adjustment, which offered great support for the ride. It’s even pretty easy to get in and out of, considering its purpose in life. 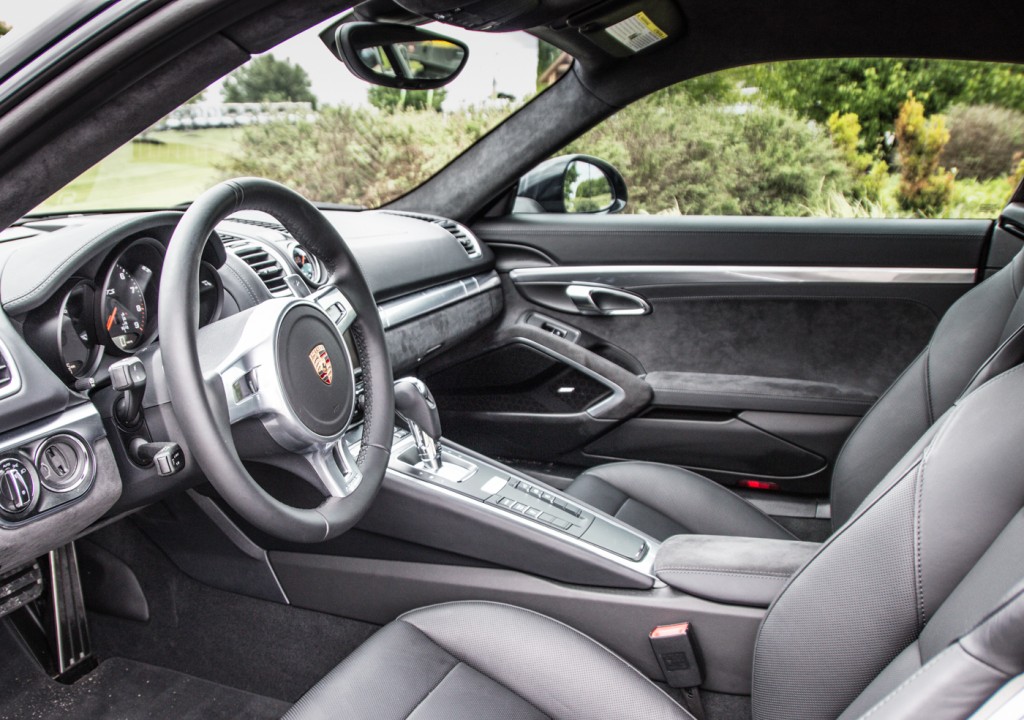 So, I’m a bit of a nerd, and in-car technology is something I find really cool. Unfortunately, most of the in-car entertainment systems aren’t quite there yet. They’re good, and getting better, but most are way too choppy and usually feature interfaces that are about five years out of date.

Porsche, though, has done a great job with their entertainment system. The design is simple, pretty intuitive, and once you get used to the way it works, makes a lot of sense. The Bose audio sounds great, and the Bluetooth audio streaming from my phone worked flawlessly.

It kept me going with lots of audio choices (radio, SiriusXM Satellite, CD, SD Card, Bluetooth, iPod etc.), an easy-to-use interface while moving, and some cool information readouts like a g-force meter and lap time measurement thanks to the Sport Chrono Package.

It’s not what I would call smooth. Trust me though, it’s a lot better than you’d expect. Back roads aren’t very forgiving, and not once did my back throw out, so that’s good. My car also had the factory -20mm suspension, so it was low. I’ve ridden in a few lowered cars, and they are bumpy and almost comically bad to ride in. The Cayman, despite its lowered stance, was a great compromise between comfort and sport, if leaning a little towards sport, on the highway and in town. It even made it over speed bumps and into my driveway with little drama. 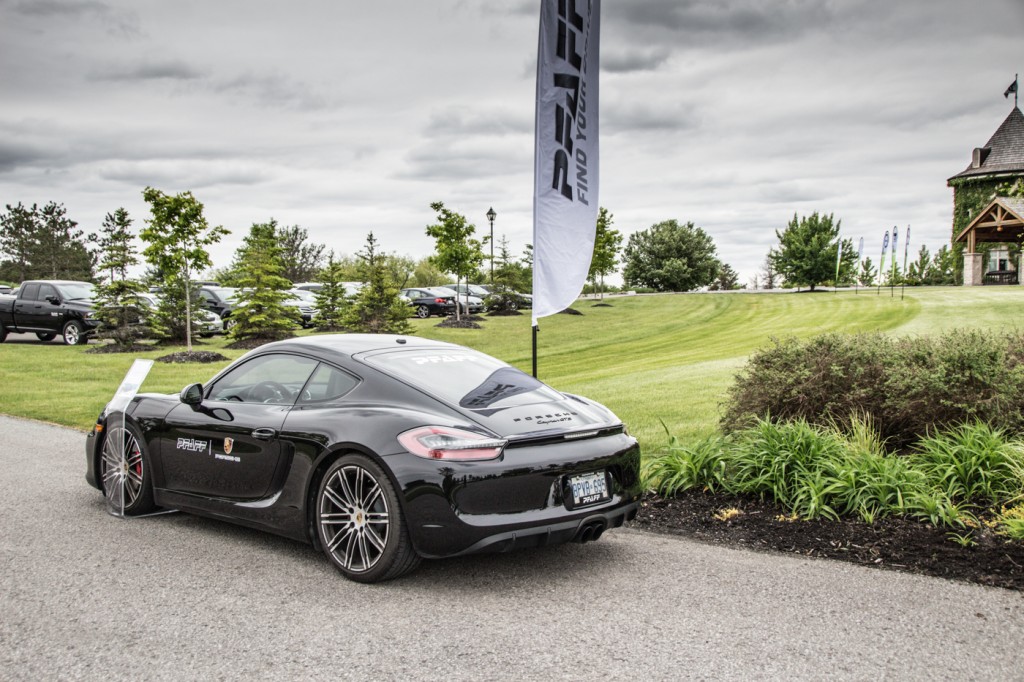 This is by far the absolute best feature of this car. I mean it. It sounds heavenly. It’s intoxicating. The overrun – when you let off the gas and let the engine spin down – is incredible. It’s just a gurgly, angry, violent sound that’s right up there with the big boys, even though it’s only a “little” 3.4-litre flat 6.

Now, you can get that sound out of just about any car with a clever exhaust. Problem is, you can’t turn it off. With the Cayman, all you have to do is turn off the very exciting “loud button” and it puts on its indoor voice. Lovely, especially on the highway (no droning in this car).

In real life there’s a time and a place for loud, gurgly exhausts. The Cayman let’s you tell it when to shout and when to whisper.

PDK is awesome. I’d still order my Cayman with a manual transmission, but I’ve got a whole new appreciation for this dual clutch box of magic. I sat somewhere in between 18 and 35 km/h for 6 and a half hours and not once was there a fuss over what gear it wanted to be in. No one could be that smooth with a stick, I don’t care who you are. It’s a shame that manuals are fading away, but you can’t blame people when these dual clutch transmissions are this smooth and this quick.

It’s got two seats, for two people, so there’s that. It also has two trunks, which are actually pretty big and will hold a couple overnight bags and a small cooler. Ultimately, it’s a small car. It’s not designed to haul all your stuff. It’s designed to haul you, quickly, around corners. Keeping that in mind, it does a great job of using all the space it has to offer, and wastes very little.

Fuel economy wasn’t bad either. During the ride I was averaging something like 9.4 l/100 km, which isn’t bad for that kind of inconsistent driving. Today on the highway, I averaged just over 8 l/100km – that’s impressive! My Volkswagen Golf 2.5 gets 7.2 and it’s nowhere near as fast or as fun. 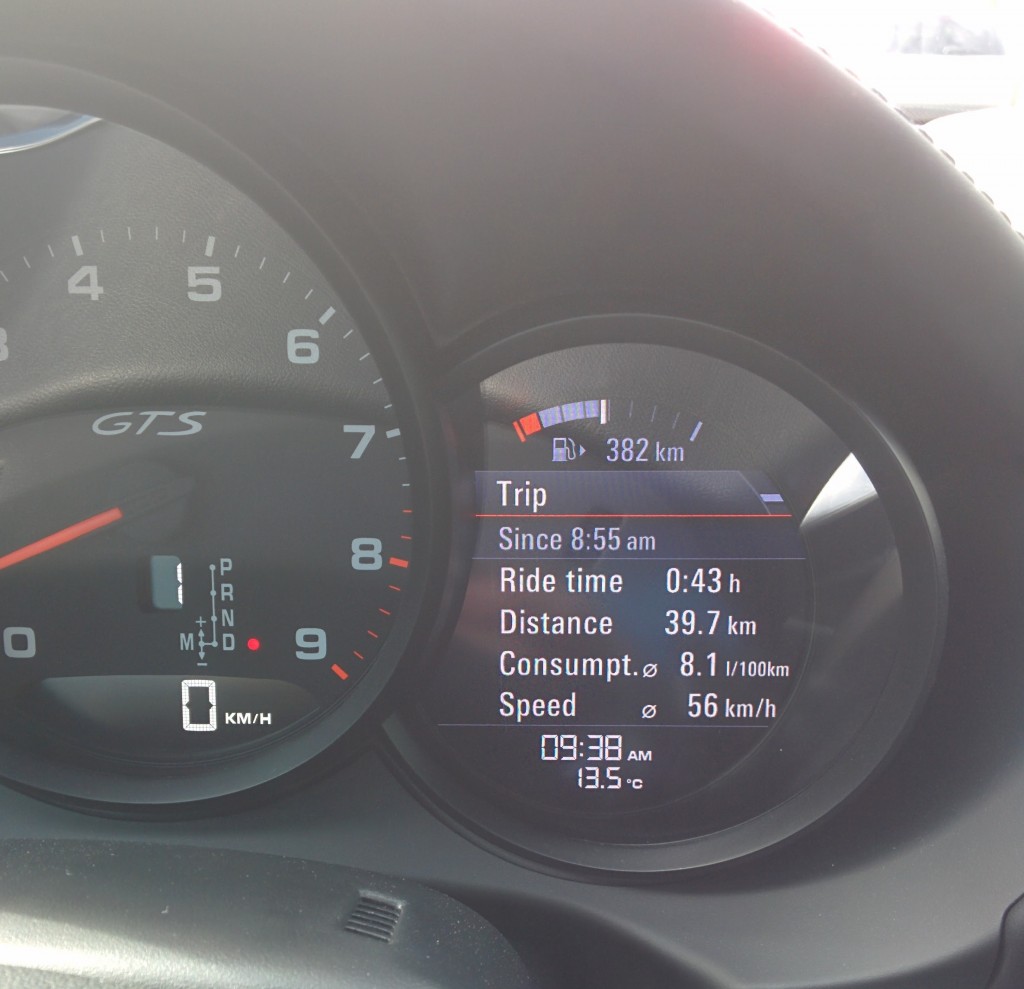 Not so crazy afterall.

At the end of the weekend, I expected to go home much like the riders; tired and sore. But the Cayman has convinced me that it’s more than just a track car or a Sunday cruiser. This is a car that I honestly believe would make a great daily driver. It has such a good balance between sports car handling, speed, and comfort. Sure, it’s not a family car, but it’s not pretending to be. It’s exactly what it should be, quick, loud, packed full of features, and ultimately, a pleasure to drive – even at 30km/h.

I don’t think the ride would have been as fun for me in another car, because I ‘d expect my drive to be nice in a Panamera or Cayenne. Instead I was surprised. I already loved the Cayman, but now that I’ve had some serious time behind the wheel, I love it for a whole new reason – I can actually see myself living with one day to day.

Check out our test drive video of the Cayman GTS: https://youtu.be/xdJ7bwMBd8g

View all the Caymans we have in stock: http://goo.gl/VeIC5w