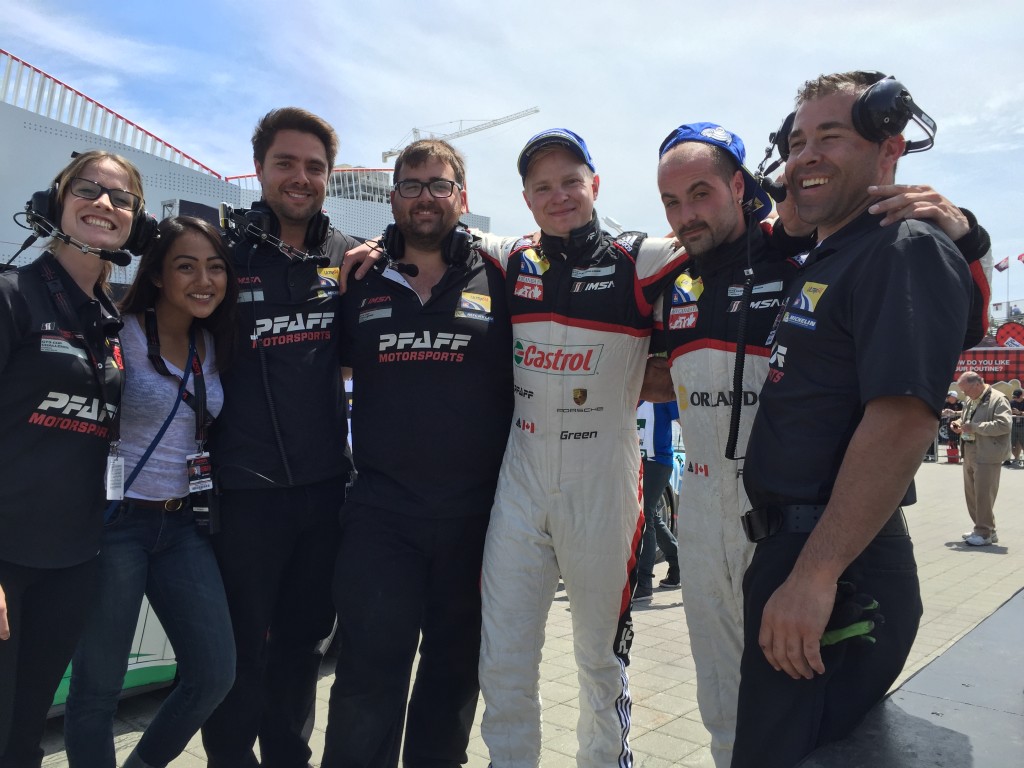 Pfaff Motorsports wrapped up a challenging weekend at the Honda Indy Toronto with four podium finishes, including two second-place finishes for Orey Fidani in the gold class, and a second- and third-place finish for Chris Green in Platinum. Other than a minor spin during qualifying, both cars ran clean races, with Orey and Chris both extending their overall points leads.
In the first weekend with rain conditions since the start of the series in 2011, the drivers had to contend with variable practice conditions, with rain during practice, a dry qualifying session and race one, and a rain-soaked second race that started under a caution.
In the first race, Chris Green started the race in second alongside B.C. native Scott Hargrove, but fell back to third at the beginning of the race when another car made minor contact with him. As the race stretched on, he grew more comfortable with the car and his lap times started dropping, and he began reeling in the #22 car of Daniel Morad, running in second. He passed Morad, and ultimately finished in the same position; Hargrove had pulled out a substantial lead during his battle with Morad. With clear air ahead of him, Chris managed his tires and brakes, especially towards the end of the race, when there were two full-course yellows due to cars in the gold class contacting the wall, and each other.

Orey Fidani, who lost practice time on Friday, and who is at the Toronto Indy track for the first time, started fifth in class, but drove a clean race where his lap times consistently improved. He set the second-fastest lap time in his class, and managed to avoid the incidents that affected other cars, and finished second on the podium behind series veteran Martin Harvey.

In race two, with rain, sometimes torrential, soaking the track, the field started behind the safety car before the race went green. Hargrove pulled out a long lead, while Green started just in front of Marco Cirone, who was chased, and ultimately passed, by a charging Daniel Morad, who would ultimately pass Chris, and went on to eventually pass Hargrove for the lead and win the race.
For Chris, who struggled with putting his GT3 Cup car’s power down for the duration of the race, the result was bittersweet. He was happy to score more points toward his championship, but felt that there was more time to be found with his car’s setup. “We set up the car expecting a drier track, but a late decision to switch to rain tires meant that I was really driving on a knife’s edge. At that point, i was basically just trying to contain the car, keep it off the walls, and make sure to bring home a full complement of points, ready to fight another day.”
It was Orey’s first weekend on a street circuit, and the rain during race two only compounded his learning curve. But he drove consistently and cleanly, improving his times with every lap and finishing a solid second behind Martin Harvey. “This has been a great learning experience for me,” he says, “both driving on a street course and dealing with the rain. But my car was great, and I’m really happy with the result.”
John Paul Dias and Andrew Marangoni, Orey’s crew, agree. “You couldn’t have asked for anything more,” they said.
The GT3 Cup series’ next stop is at Calabogie Motorsports Park.