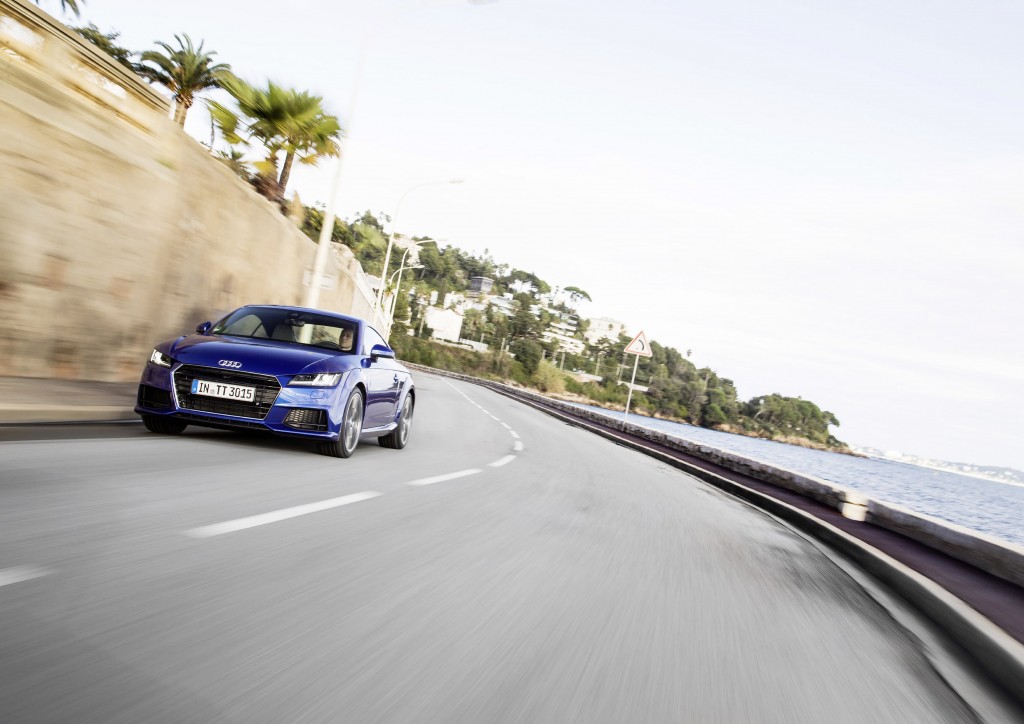 A modern classic has been redesigned and reborn. The third generation of the iconic Audi TT is arriving later this year in our showrooms, its improved driving dynamics marking it out as a genuine sports car. An operating concept centered around its new digital cockpit also sets new standards of excellence for interior technology.

The new Audi TT coupe is 4.18 m long with a wheelbase of 2.51 m, with very short overhangs. Audi designers reinterpreted the lines of the original TT of 1998, and added many dynamic facets to the design. As you would expect of a new Audi, high technology is a big part of the story: LED or Matrix LED headlights are available, the latter using small, controllable, individual LEDs to produce the high beam. The headlights are divided by a structure of bars that emit the daytime driving pattern, while the tail lights also contain permanently illuminated bars of light.

The body of the TT represents a new evolutionary stage of the famed Audi Space Frame (ASF) concept. The occupant cell, and all of the components of the outer shell, are made of aluminum. With the S line exterior package, the new TT achieves a low drag coefficient (cD) of 0.29.

The available engines can be paired with a manual transmission or an optional six-speed S tronic, and a new evolutionary stage of the quattro permanent all-wheel drive system. The hydraulic multi-plate clutch is configured to achieve maximum energy efficiency, and the electronic control system brings stability and driving pleasure up to a new level. When the car is driven aggressively, the system literally pushes the TT into corners and allows controlled drifting on wet road surfaces.

Management of the S tronic’s clutch is incorporated into the Audi drive select system, which is available as an option. This system lets the driver control the operation of key driving dynamic controls in a variety of different modes, including the Audi magnetic ride adaptive damper controls. Other highlights of the chassis include progressive steering, four-link rear suspension and electronic stabilization control (ESC). ESC functions include torque vectoring, which is activated in fast cornering – it optimizes handling as necessary by means of very slight brake interventions on the unloaded wheels at the inside of a curve.

Viewed from above, the new TT’s instrument panel resembles an airplane wing. The round air vents, a classic feature of the TT, incorporate all the controls for the air conditioning system. The newly developed lightweight sport seats are mounted low, for a sporty feel. The luggage compartment of the 2+2-seater has a capacity of 305 to 712 L.

In the user interface concept, which is entirely focused on the driver, the Audi virtual cockpit replaces both the analogue instrument cluster and the MMI monitor. The driver can toggle the 12.3-inch display between two different viewing modes. In the classic view, the speedometer and tachometer take center stage. In infotainment mode, more space is given to aspects such as the navigation map.

The MMI operating terminal has been limited to six physical buttons. The top-of-the-range TT also incorporates the MMI smart touchwheel – a round rotary touchpad in the top of the rotary pushbutton. The menu structure was inspired by a smartphone and includes an MMI search function. The voice control system understands a large number of everyday language items.