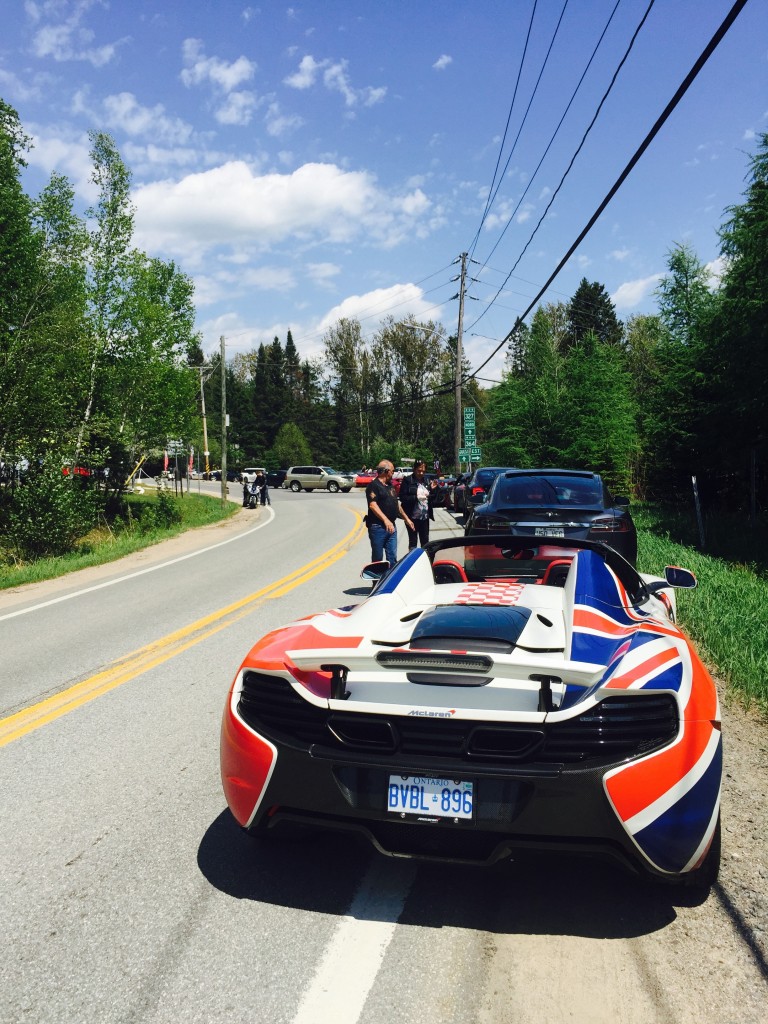 McLaren Toronto spent the past week in Montreal gearing up for the biggest sporting weekend in Canada, the Canadian Grand Prix. After visiting hot spots in and out of the city, the trip’s finale was an appearance at the first running of the D4S Canada / Drive for Smiles Poker Run event to benefit of the Starlight Foundation.

The starting point for the rally was at Lamborghini Montreal, where 110 sports cars and supercars gathered early for a coffee and to gather information for the day’s activities. Not only was our McLaren 650S sporting a special historic livery – from the FINA McLaren F1 which competed at the LeMans 24 Hour race in the 90’s – it was also a true crowd-pleaser.

At 11:00, our group, called “Juillet,” took off toward the first destination, which was approximately one hour west of Montreal, in the Ontario/Quebec border town of Hawkesbury. There, we collected our third card of the poker run, and assembled to take off to the second stop.

As we entered the beautiful country roads of Quebec and climbed our way north heading towards the surrounding areas of St-Adele, our McLaren 650S really came to life, handling every corner and undulation with ease, and an unprecedented level of comfort and performance. Upon arriving at a traditional hot dog/poutine stand, people quickly gathered to ask questions about the car as they witnessed how gracefully it behaved through some of the most challenging roads the province has to offer.

Our fourth card was handed out, and we were on our way to the final destination, which Autodrome St-Eustache, just north of Montreal, where on track competitions took place, including slalom and drag racing.. This was a great opportunity to see how the McLaren would match up against its competitors. Even though our McLaren demo did not hit the track, some of our customers did, in two 650S’s and one 12C. Needless to say, they all represented themselves very well, and held up McLaren’s reputation as a winner.

To end the day, guests were up for a real treat: the McLaren 12C CAN-AM racecar took to the track and offered charity rides to eager speed seekers. What a great experience that was.

Hats off to the entire D4S Canada team who put together an incredible event with the help form their partners, we definitely look forward to coming back again next year.