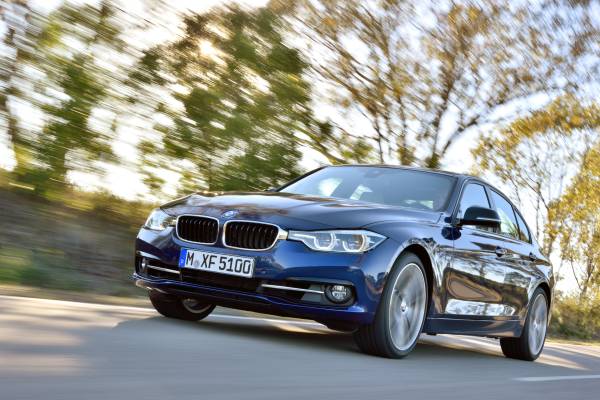 The pioneer of the modern sports sedan segment, the BMW 3 Series has consistently been hailed as an icon of its class for over 40 years. Over six model generations, it has always delivered its dynamic excellence wrapped in a package that offers great room for four, up-to-date design, and impressive efficiency and practicality. Indeed, such is its strength that one in every four BMWs sold is a 3 Series.

Recently announced but not arriving at Pfaff BMW until later this year, the 2016 3 Series features a sharpened design, even more advanced technology, and new, cutting-edge engines that help it maintain its class leadership. The highlights of the new range are the 330i, replacing the 328i, and the new 340i, which will replace the 335i. They can both be linked with a six-speed manual gearbox or an eight-speed Steptronic transmission, and with classical rear-wheel drive or BMW xDrive intelligent all-wheel drive.

The design of the new 3 Series has been sharpened, and shows even greater precision and detail improvements. At the front, new aprons with revised air intakes accentuate the feeling of width. The sculptural rear apron and standard LED rear lights emphasize the car’s width and its sporting intentions. An innovative lighting concept, featuring newly-designed headlights and striking LED daytime driving lights, underlines the car’s visual appeal; full LED headlights can now be specified as an option.

The interior features new materials and additional chrome highlights for the controls, air vents and central control panel. The new centre console, with a sliding cover for the cupholders, enables better use of the storage surfaces forward of the gearshift lever. A wide range of personalization options, including new upholstery and interior trim elements, as well as new wheels, exterior colours and equipment options, round off the specification choices.

All engines for the new 3 Series are now sourced from the newly developed, modular BMW EfficientDynamics engine family. Features including revised turbochargers help give the new four-cylinder engines even sharper responses. The four-cylinder unit in the BMW 330i and the six-cylinder unit in the 340i are even more efficient than their 328i and 335i predecessors. On cars specified with the six-speed manual gearbox, an engagement speed control function automatically blips the throttle on downshifts. The eight-speed Steptronic transmission allows multiple sequential downshifts, which has a positive effect on smoothness and acoustics. The coasting function, meanwhile, increases efficiency by another notch.

BMW has always played a leading role in the link-up of driver, vehicle and outside world. Its BMW ConnectedDrive products and services offers a unique selection of web-based services and driver assistance systems designed to enhance comfort and improve safety. An optional full-colour head-up display enables relevant information to be displayed directly in the driver’s field of vision. The navigation system has quicker start-up, significantly faster route calculation and even more realistic 3D graphics. Maps are automatically updated free of charge for three years.