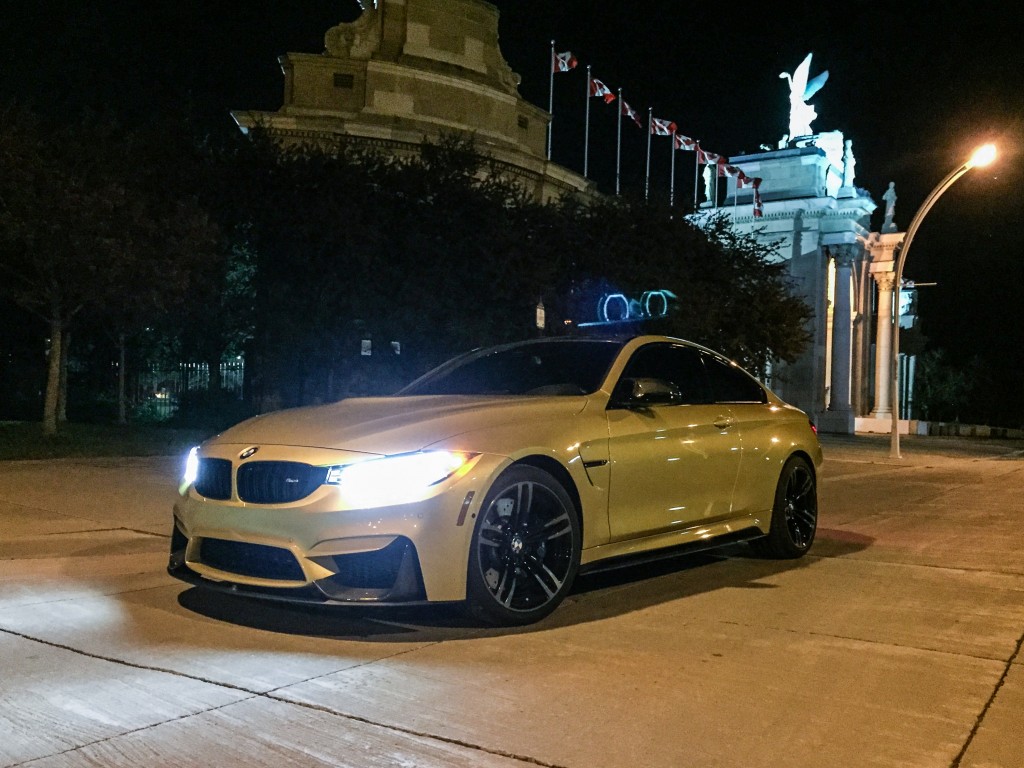 I have to admit that I wasn’t on-board when BMW decided to to make the M3 coupe the M4 coupe. For the regular two-door 3 Series models, I kind of got the logic of creating more distinction between the two-door coupe, which has, since the E46 generation, been longer, lower, and more elegant than its practical four-door counterpart. The latest models are more distinctive than ever, with the 4 Series not only being significantly lower and wider than the previous 3 Series coupe, but is also longer in overall length and wheelbase than the new 3 Series sedan. So, calling the new coupes 428i and 435i made sense.

But the M3 is, well, the M3 – one of the most iconic names in high performance and the emotional centre of the BMW M brand for almost thirty years. The original M3 had two doors, and while four-door versions were offered in E36 and E90 forms, it was always the two-door that retained that crucial link to the racing cars. Calling the new coupe M4 seemed to me like BMW was disrespecting the car’s heritage.
Thing is, though, after spending time in both a new M3 (which you can read about here) and the new M4, it’s easy to understand why BMW felt a name change was warranted. It may share the four-door’s insanely torquey twin-turbocharged straight-six and its choice of transmissions – six-speed manual, or in the case of the car I drove, the optional M DCT dual-clutcher with paddle shifters and adjustable shift speeds. It may also share the same wheel and tire package. But, on the road, it feels so different.
Part of it is psychological. The batmobile-like styling stretches low and wide, and the window sills of the 4 are higher, the roof lower, the feeling more enclosed – not claustrophobic, exactly, but you have less of a sense of where the car’s corners are than in the more upright M3, which has taller glass and narrower pillars. Sitting behind the bulging hood, settled in deeply-bucketed seats that sit lower to the ground, the M4 feels as luxurious and spacious as the previous M6, an impression reinforced by my car’s interior, which had the optional leather-wrapped dashboard and door caps to go along with the carbon-fibre trim, big infotainment screen, intuitive iDrive, and over-the-top backlit M logos in the seats. Sitting in traffic, the feeling is cocooning and surprisingly exotic; the flip side is that you’re intensely aware of the car’s width, which makes threading the M4 through gaps more intimidating than it is in the similarly-wide M3.

But the big story is that, despite sharing much of its technical content, the M4 feels distinctly different to drive than the M3. Its little three-spoke wheel has the same three selectable assistance curves, but it turns in even more aggressively, and the front tires seem to bit even harder than they do in the four-door. The car’s front-end grip seems limitless; you go around the same corner time after time, thinking that at some point it’ll start to wash away, but you simply can’t go fast enough on the street to find out where. Despite the longer wheelbase – which should suggest a calmer, more gentle experience – the rear axle is also a lot livelier; roll into the throttle in second, and you’ll feel a distinct twitch, followed by traction-control intervention, that you wouldn’t in the sedan. The M4’s ride quality is also distinctly more brittle than the M3’s; neither of the cars I drove had the optional electronic damper control, and while I didn’t feel like the four-door needed it, I’d recommend it on the two-door to calm things down on less-than-smooth pavement.

That’s just the start of the story with this particular car, though, because it was also fitted with pretty much every optional dealer-installed M Performance part available from the catalogue, save for ceramic-composite brakes.
Against the searing metallic background of the Austin Yellow paint, I really liked the blacked-out kidney grilles ($205 each), side vents ($205 each) and side skirts ($250 each) for the contrast they provided; I wouldn’t bother with them on a dark-coloured car, which needs a bit of smoked-chrome jewelry to set off its aggressive curves. Because this car also had the full carbon-fibre roof – reducing the amount of weight up high in the car, where it matters most – the carbon mirror caps ($575 each) and front air dam inserts ($920) and lower lip ($570) did a great job tying the whole car’s look together. But much as I liked the sliver of carbon surrounding the quad exhaust pipes, I would probably skip it, as the $1,650 price for that small piece would almost pay for the rest of the carbon bits.
The real conversation piece, though, is the $5,620 M Performance exhaust, capped by a quartet of $320 titanium exhaust tips (titanium-carbon tips are also available; they’re a bit much, visually). This lightweight titanium piece is made by Akrapovic, a Slovenian company as well-known for their work on motorcycles as on cars – including a number of factory Kawasaki, Honda, Suzuki and Aprilia racing bikes and the factory silencers for the Porsche GT2 RS. And when you fire up the M4 in an underground parking lot, the racket sounds like you’ve lit up the entire MotoGP starting grid. It’s loud enough to set off car alarms when you blip the throttle, and aggressive enough to scare pedestrians of the two- and four-legged variety; it’s kind of awesome.
When you’re in the mood for it, the noise the M Performance exhaust makes is incredible, and it addresses the only real issue I have with the drivetrain of the M3/M4, which is that the noise (a combination of turbo-muffled rumble and some synthetic sounds piped in through the sound system) doesn’t deliver audible excitement to match the excitement delivered by the engine’s prodigious power and torque. 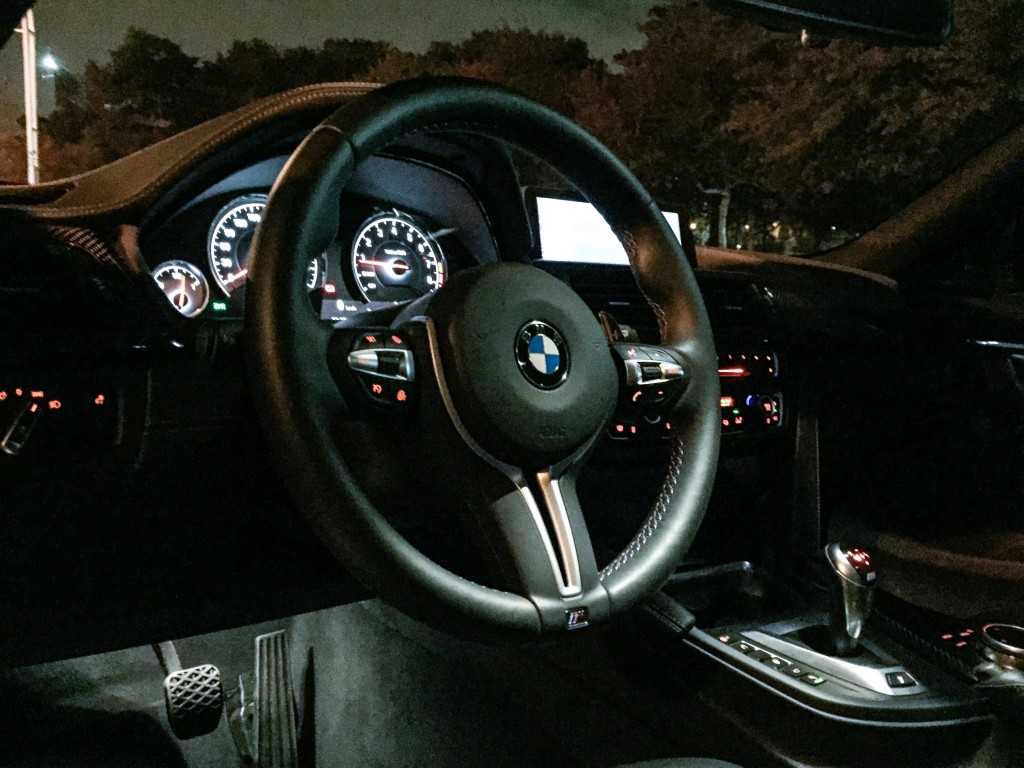 At low revs, the exhaust is pretty civilized, but as you crest 3,000 rpm – and you will, thanks to the engine’s willingness to rev and its thundering power delivery – it gets very, very loud. And that’s before you put the engine in sport mode and open a couple of flaps in the silencers that magnify things still further. It’s a thrilling noise, adding a ton of excitement on the open road, and is enough to wipe out the piped-in sound from the audio system. Downshifts sound, amusingly, like cannon fire coming from the back of the car, but it’s so loud that it draws almost too much attention when you’re just trying to slink through traffic and keep a low profile.
Which, maybe, you don’t want to anyway, if you’ve chosen Austin Yellow paint. The good news is, the M3 and M4 have such a breadth and depth of capabilities that they can be whatever you want, however loudly you want it. Pick your number of doors, pick your driving behaviour, pick your exhaust volume, and you have one of the most capable and versatile performance cars on the market. 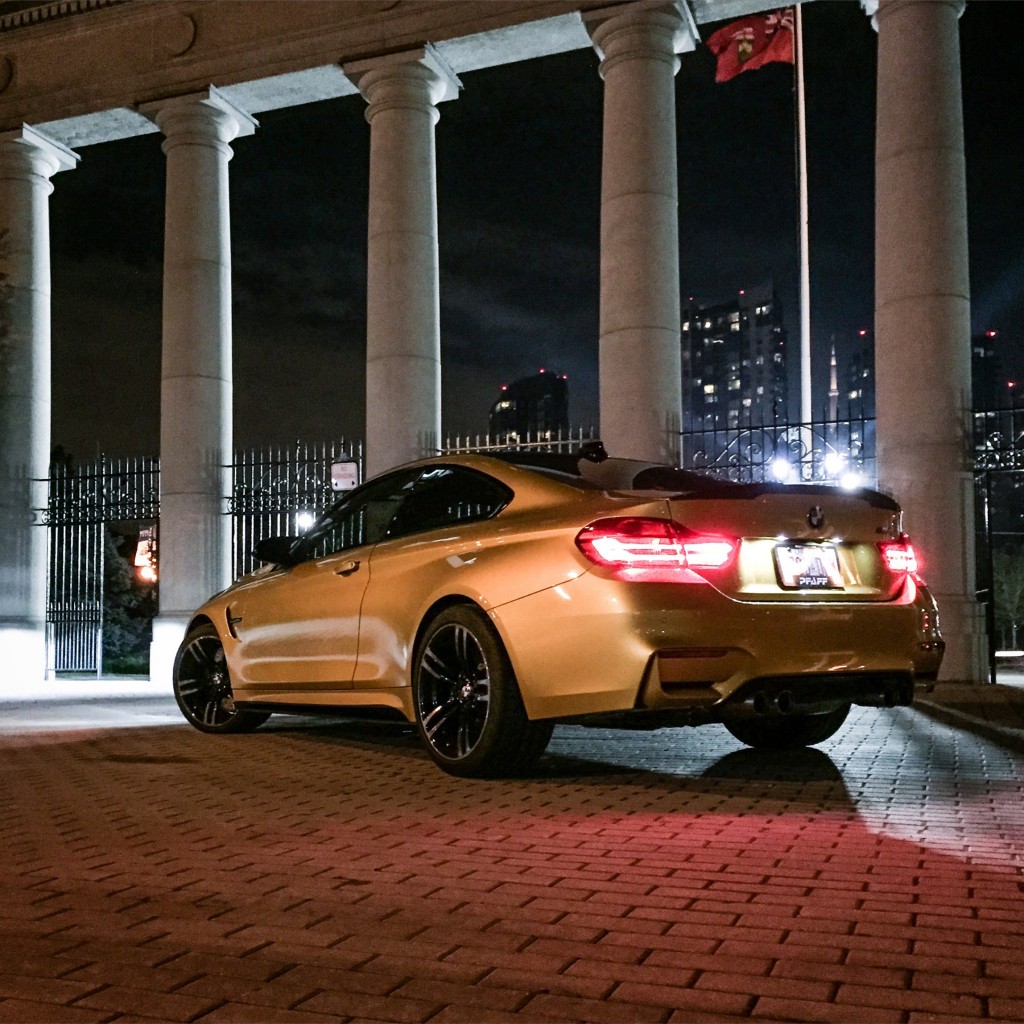