Pfaff Motorsports kicks off the 2015 season 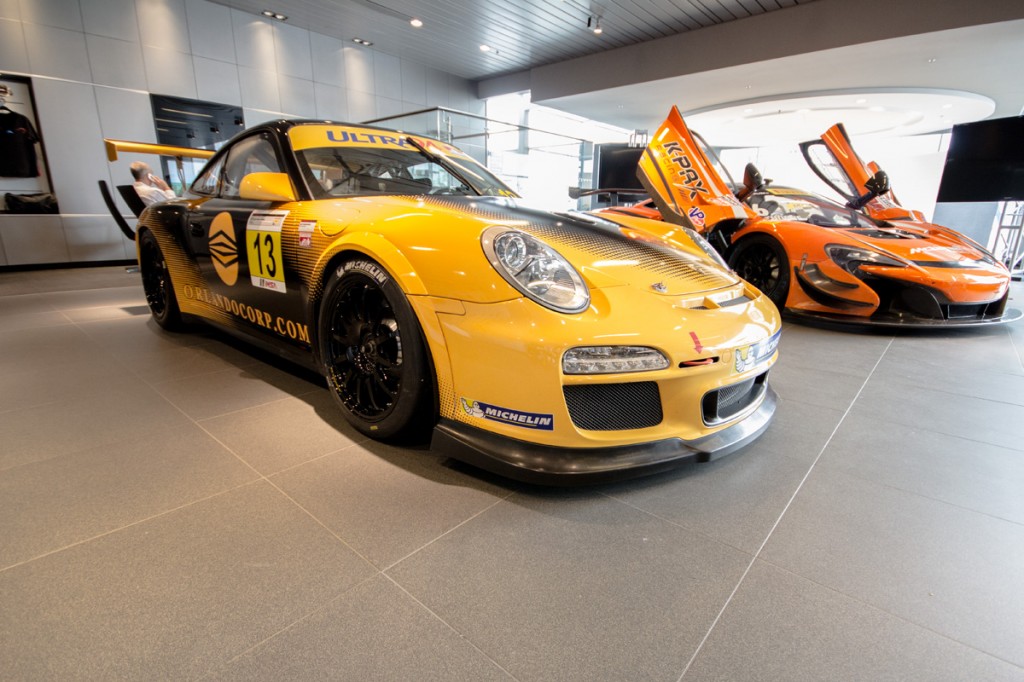 It was a busy few weeks for Pfaff Motorsports as it geared up for its first race weekend at Canadian Tire Motorsport Park from May 15-17. The team, competing in the Ultra 94 Porsche GT3 Cup Challenge Canada by Michelin, this year features a two-car entry, driven Chris Green in the Platinum class and Orey Fidani competing in the Gold class.

To officially kick off the season, the group recently hosted a launch event at its Pfaff Tuning/McLaren Toronto facility, attended by over 100 enthusiasts and fans. Green and Fidani introduced the rest of the team and announced a partnership with McLaren K-Pax racing, whose two entries in the Pirelli World Challenge would be carrying Pfaff and McLaren Toronto branding for the weekend.

Driven by Kevin Estre and Robert Thorne, who recently scored a magnificent 1-2 finish at Barber Motorsports Park, the McLaren 650S GT3 is a front-running race car with undeniable presence. The orange and black McLarens, sitting alongside Fidani’s yellow-and-black 911 GT3 Cup and Green’s iconic red, white, and green Porsche, made for an impressive spectacle.

2015 will be Pfaff’s second season as an independent, fully-fledged in-house operation. Having previously partnered with Fiorano Racing in 2012 and with Alegra Motorsports in 2013, its 2014 Porsche GT3 Cup effort – run completely in-house by enthusiastic employees on a volunteer basis – brought home second-place finishes in driver and team championships. This year, an expanded team, dedicated to bringing home their first championship, supports the two drivers.

Joining Pfaff Motorsports in 2015, Orey Fidani will drive the #13 Pfaff-Orlando Motorsports Porsche GT3 Cup in the Gold Class. Orey grew up fascinated by race cars, custom cars, and hot rods; a fascination for tuning cars and a need for speed led Orey to open his own auto shop, where he built his first dragster. After a succession of driving schools and track days around North America, he spent a year building his skills by open-lapping street cars and then a season in regional racing; in 2014, he raced in the GT1 Sprints and took home the championship in his first year.

Returning for a third full season with Pfaff Motorsports, Chris Green will once again be driving the #9 Pfaff-Castrol Motorsports Porsche GT3 Cup in the Platinum Class. With a career spanning 21 years, Chris started racing karts at the age of nine in his home province of Quebec. In the 24 races Chris has contested in the GT3 Cup Challenge, he has won 11 times, and has racked up 21 podium finishes, 19 pole positions and numerous fastest race laps.

Head Technicians Nick Harrison and John Paul Dias are also both Pfaff employees. Nick is in his third year with Pfaff Motorsports, and also works at Pfaff Tuning. He is currently building his own drag car – a 1992 VW Golf with a turbocharged VR6 – to compete at local events. John Paul has worked at Pfaff Porsche as a Porsche technician for the past seven years, and was part of the Pfaff Motorsports team in 2013.

Katelyn Field, Tire/Fuel Technician, is a 22-year-old Service Consultant at Pfaff Audi Vaughan, and drives her 1999 Honda Civic it in the Canadian Sport Compact Series. Naveen Islam, Administrator at McLaren Toronto and Pfaff Tuning, has been with Pfaff with for over 5 years and will be overseeing administrative and catering needs during race weekends.

Gerald Maidment, Transport Truck driver for APPS Transport, has been a Harley-Davidson enthusiast for his entire life and is looking forward to learning more about our Porsche race cars. Matt Berenz, Multimedia Coordinator, will be filming a video series about the team, which can be viewed on the Pfaff Automotive Partners YouTube channel.