The BMW M3 is the state of the sport-sedan art 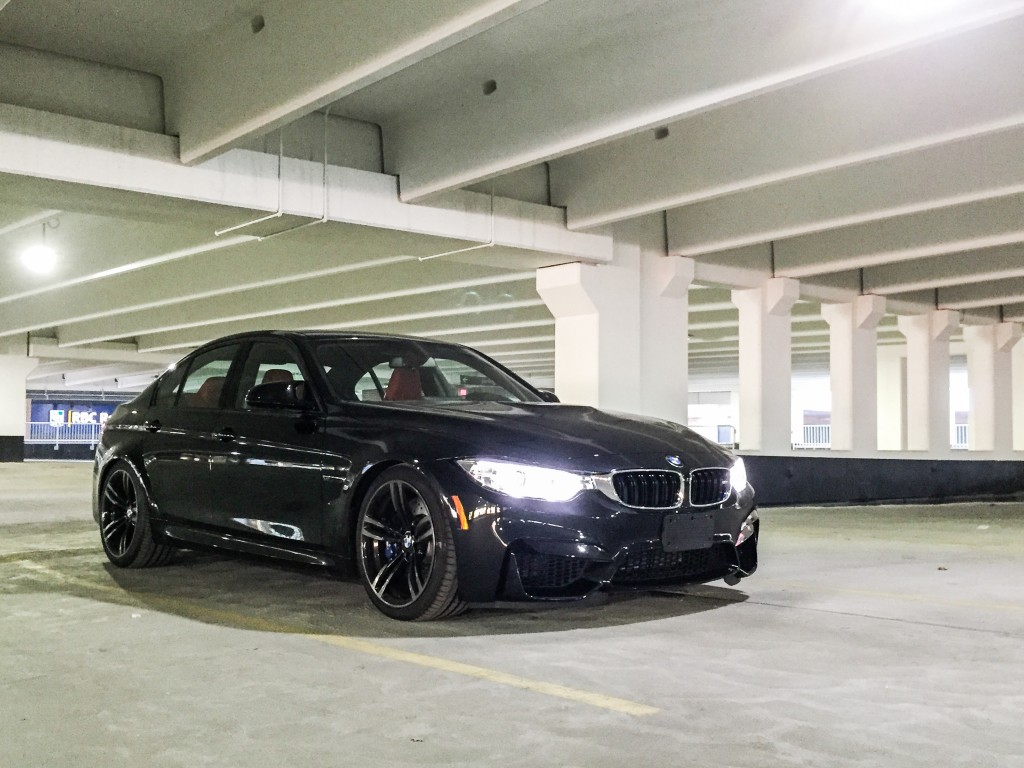 The BMW M3 has been a fixture in my life as a car enthusiast. When the first-generation E30 M3 had just been introduced. Its box-flare fenders, big wing, and racy sound, so different from the conservative 3-series of the day, helped to spark fantasies of fast driving, of racetracks, of going flat-out on the autobahn. (No speed limits, my adolescent self thought. How is that even possible!) In the late nineties, I somehow managed to score a drive in a second-generation E36 M3 just after getting my license; its pin-sharp throttle response of its straight-six, its clickety-click gearbox, and its superb handling left an indelible impression.

I was working as an auto journalist when the E46 and E90 M3s were introduced, and it just got better and better. I can remember wondering, when the E90 was first announced, if BMW was about to ruin a good thing in the transition from straight-six to V8 power. But somehow, in addition to handling and steering even better than the E46, the E90 managed to retain the metallic, buzz-saw wail that characterized the motorsports-derived sixes that came before, and revved to over 8,000 rpm with race-car savagery. It was a brilliant car, made even more brilliant by the fact that you could option it with adjustable dampers and a dual-clutch gearbox; their adjustability significantly broadened the M3’s breadth of capabilities without reducing its ultimate performance.

Now, we have the F80 M3 – an M3 that is, for the first time, available only as a four-door, as BMW’s gone and designated the coupe the M4, ending the two-door line that began in the eighties. The power unit has reverted to a straight-six, for the first time boosted by two turbochargers. Like all of the M3s before it, it’s the defining sports sedan of its era because its technical features are in lock-step with industry trends – and the most extreme expression of them. When revs were king, the M3 revved higher than anyone else; now that turbos, torque, and pursuit of lowered CO2 emissions define manufacturers’ efforts, the M3’s powerplant does more and does it better than the rest.

Indeed, the whole car embodies the most current performance-car thinking. In addition to the efficient, powerful turbocharged engine and available M DCT transmission (which most buyers order these days), the new M3 also nods to the current obsession with adjustability. There are three different settings for the gearbox, which alter how fast and how hard it shifts. There are three settings for the throttle – efficient, sport, and sport plus. And there are three different settings for the steering. Order the optional electronic damper control, and you can adjust the suspension as well. Which means that, as with a lot of modern cars, it takes a while to find the setup you like the most. Fortunately, after figuring out that you want light steering, the middle setting on the throttle, and the fastest shifts, you can save it using one of the two M buttons on the steering wheel like a radio preset. (The other setup, I decided, was for track work: everything dialled up to max.)

While the multifarious setup options may mean that it takes a while to find your personal sweet spot, they do mean that the new M3’s abilities have unparalleled breadth. In the softest, smoothest settings, it does a convincing impression of a luxury car, the dual-clutch gearbox slurring shifts like an automatic, the engine’s noise a distant rumble and the ride quality surprisingly good; indeed, perhaps due to its non-run-flat Pirelli P Zeros, this M3 rode better than the last 328 I drove.

Turn everything up, though, and this car is a monster. The turbocharged six – you’d think there’d be turbo lag, but there really isn’t – responds with a savagery that even the old V8 lacks, its 406 lb-ft of torque drop-kicking you down the road. More impressive than even the lack of lag is the responsiveness of the engine and its eagerness to rev. Turbocharged engines can often feel lazy before the boost comes on, but from idle to redline, the M3’s engine pulls hard, truly feeling like a big, naturally-aspirated engine. The M DCT box, in its fastest setting, cracks off instantaneous shifts, and uses the engine’s torque to bump you into the next gear. In its behaviour it feels a lot like the McLaren 650S’s transmission, which is high praise for a car that starts at $74,000.

Ironically, the steering feels the most BMW-like in its “comfort” setting. Unerringly precise in any of its three settings, it feels most natural when it can dance a bit in your hands, transmitting details up from the road surface. While the two other settings add a bit of weight, which for some drivers might deliver an extra sense of confidence, the extra weight masks some of the natural feel. And the more you drive the M3, the more you realize just how much front-end grip there is; on the street, at least, I couldn’t find a point where the front started to wash away in any corner. With meaty 275-mm-wide rears, I wasn’t going to make the back end come unstuck either, making this one of the most confidence-inspiring rear-drive four-doors on on the planet. Indeed, it’s so confidence-inspiring that you really have to watch your speed carefully, drive it as fast as it seems to want to go, and you’ll quickly frighten other road users with your closing and cornering speeds. 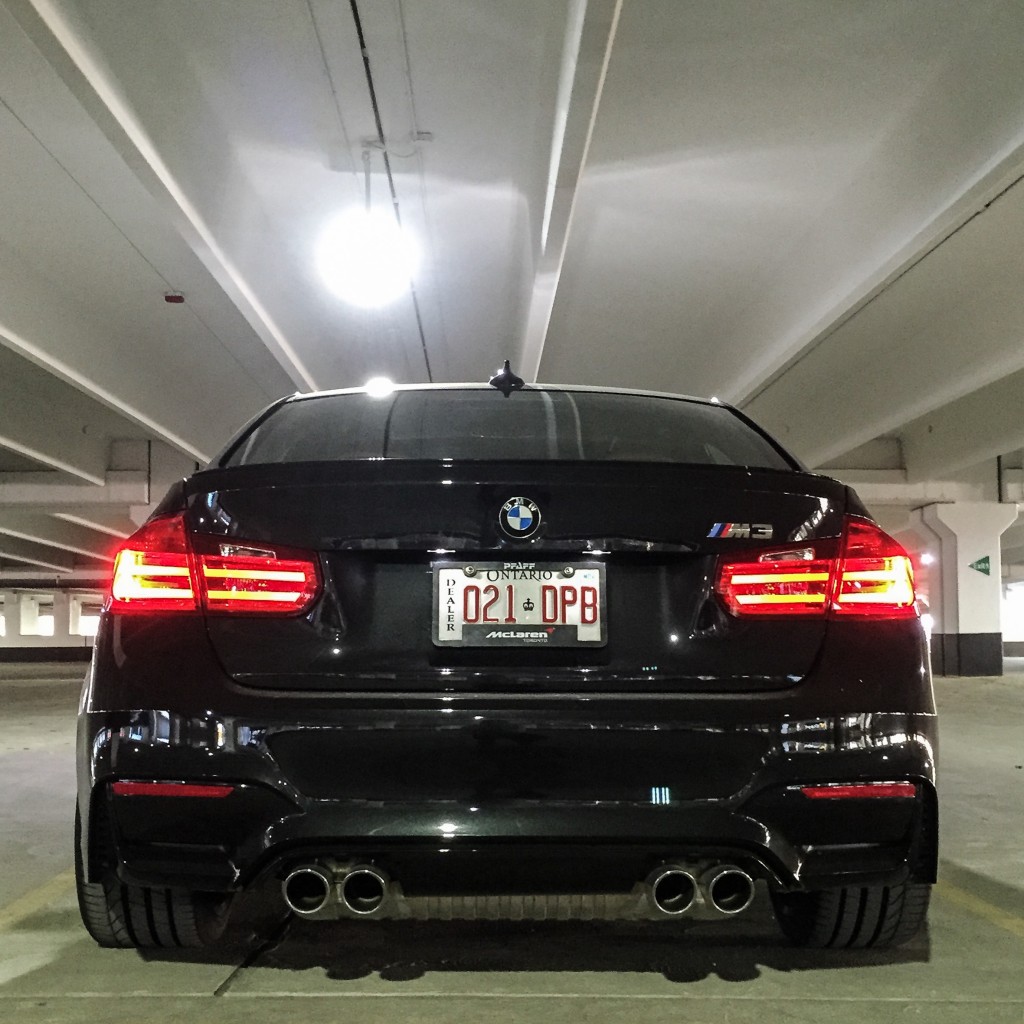 All this performance is abetted by a set of brakes that love up to the rest of the car. Braking was one of the few weaknesses of old M cars, but the new M3’s four-piston front calipers grab massive vented discs, and carbon ceramics with six-piston calipers are available as an option. Pedal feel is terrific and the car’s stopping power is even more massive than its acceleration.

There is, basically, just one thing I don’t like about the M3, and that’s the noise that it makes once you switch it out of comfort mode and into one of the more aggressive driving settings. Dialled down, the engine makes a distant rumble overlaid with some fun turbo noises: some whooshes, the occasional whistle and pop. It’s less characterful than the old V8, but it’s at least honest. In sport and sport plus, though, not only does a valve crack open in the exhaust itself, but you also get electronically-generated noise pumped in through the cabin speakers. It isn’t a good noise: a rough-edged trumpeting that’s supposed to – I guess – remind you of the V8, but which is an obviously synthetic blare. Trawl the internet forums, and you’ll find ways to disable it, but it’s disappointing that a car built by BMW’s enthusiast division, for enthusiasts, thinks that this is okay. Fortunately, BMW itself offers an M Performance exhaust (your choice of pipe finishers in carbon or titanium) which ought to address this situation. 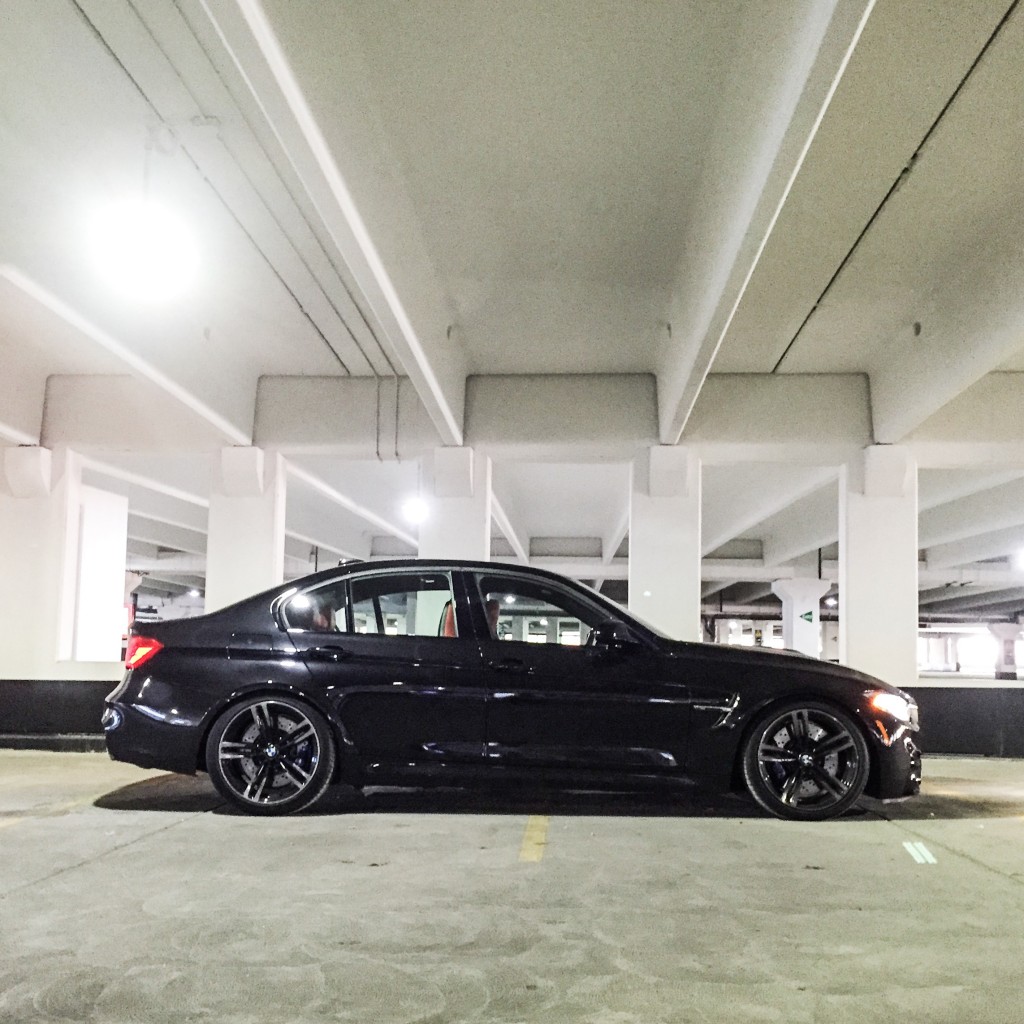 That I’ve managed to expend so many words whining about the exhaust is an indication of just how much I love this car. Fitted with that M Performance piece (and with the faux audio sounds disabled), the new M3 is about as perfect a four-door sports sedan as I can think of right now. It has sufficient space for four, but is still compact enough to be daily-driven in the city. It has near-supercar levels of performance (100 km/h comes up in just four seconds) but ride quality and refinement that make it an effortless long-distance cruiser. And it corners and brakes as well as it goes. With its flared fenders, four fat exhaust pipes, bulging hood, and 19-inch wheels, it looks totally badass too.

It is, as with all of its predecessors from the original E30 M3, an expression of the state of the sport-sedan art. BMW as a brand was built on a heritage of motorsport-bred sport sedans, and this car shows why that continues to be true. Experience it yourself this summer at one of our ultimate test-drive evenings, where you can ride or drive it, along with a selection of other high-performance Pfaff offerings, at Canadian Tire Motorsport Park. 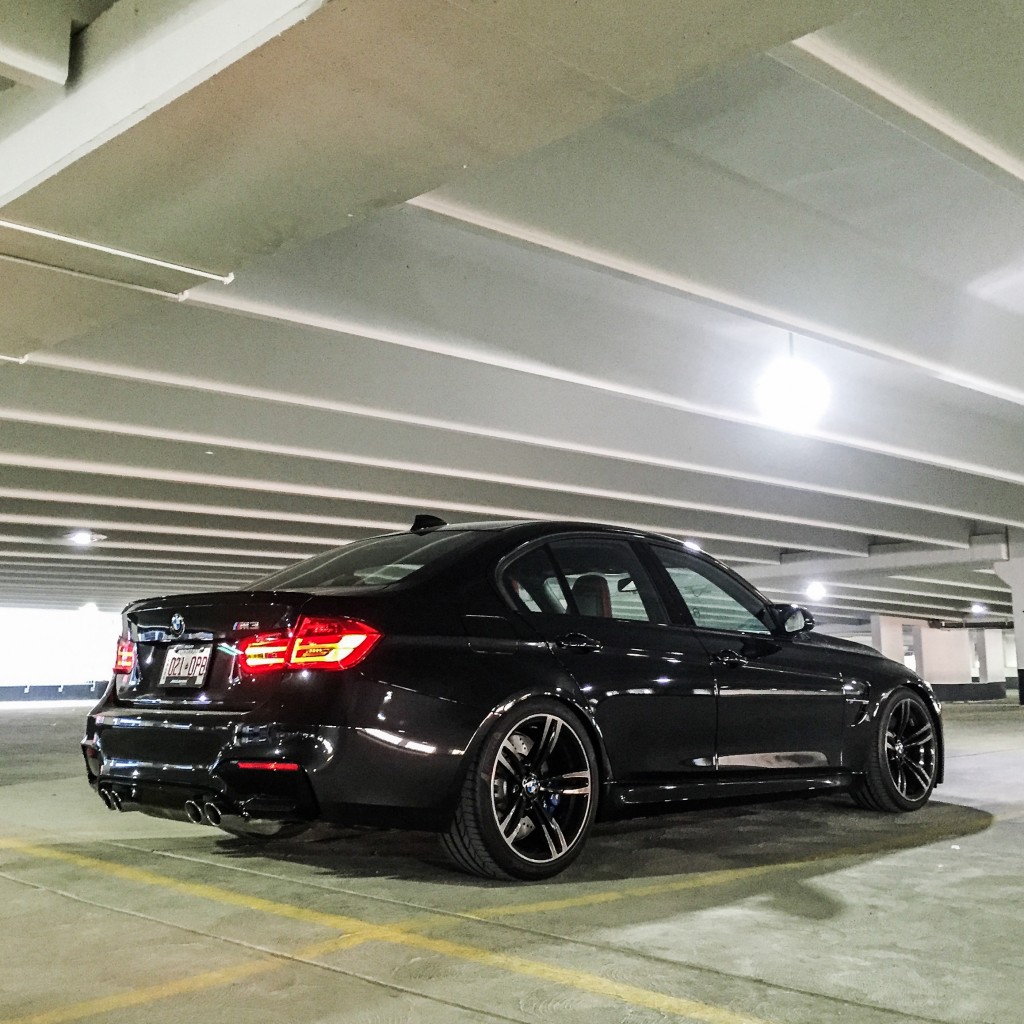