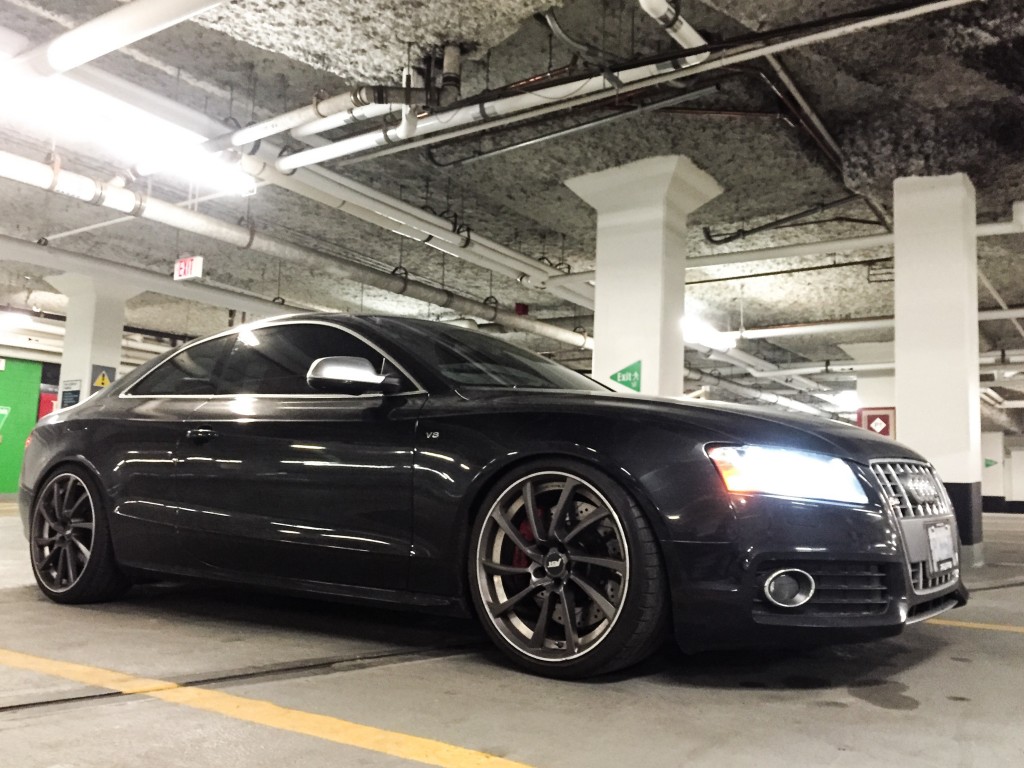 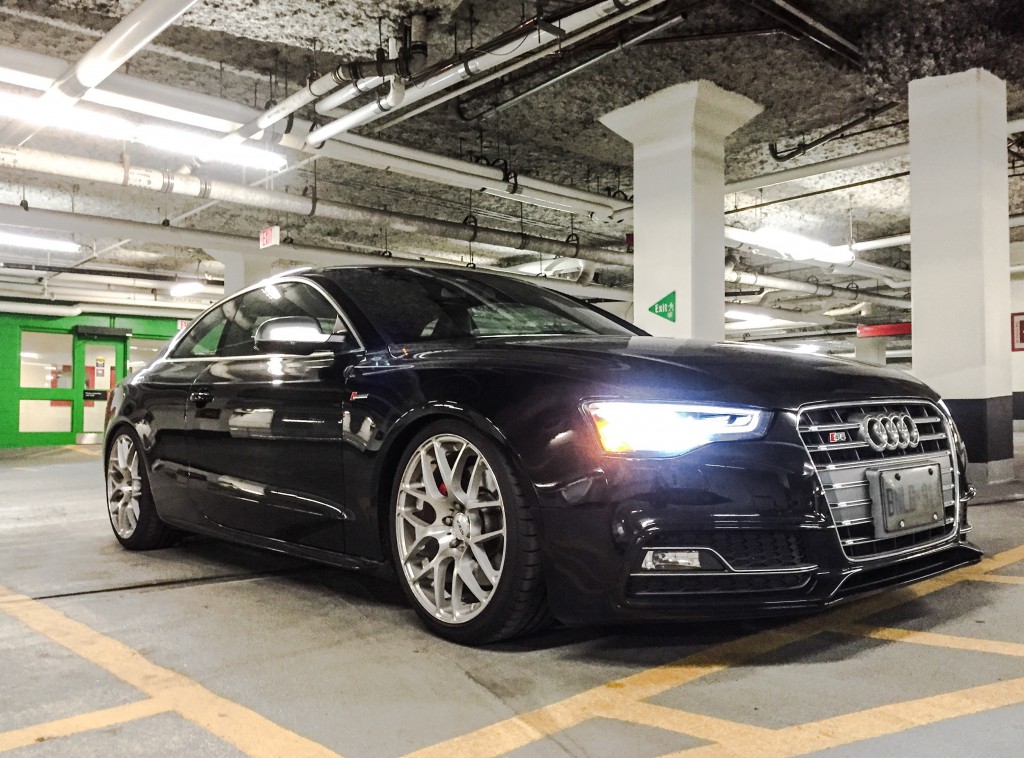 “My car’s better than your car.”

Each of them thinks their car is better than the other’s. And, being big boys with big toys, they needed a disinterested third party to deliver the final verdict. Oh, no pressure then.

The main difference between Chris’ S5 and Alex’ S5 is that Chris’ is a 2010 model, with a naturally-aspirated 4.2-litre V8 producing 340 hp and 325 lb-ft of torque. When the S5 went through its mid-cycle facelift, Audi swapped in the 3.0-litre supercharged V6 that’s fitted to Alex’ car, which produces an identical amount of torque, but a little less power – 333 hp. It also has all of the upgrades that came along with the facelift, including revised headlights and front bumper, an updated MMI system, and Audi’s Drive Select system.

Facelift or not, they both look pretty badass from the outside. The S5’s proportions and detailing are just about perfect (I recall its designer, Walter da Silva, saying at the press launch that the stars had aligned for this project and he’d never do a car as beautiful again), its blistered fenders a nice historical cue stolen from the original Quattro. Lowering it and adding a set of custom wheels only enhances its look. Pfaff tuning fitted Chris’ car with ABT two-tone alloys with a silver lip and a twisted double-five-spoke design, while Alex’ has Stasis wheels with a more traditional motorsport look.

Pfaff tuning also upgraded the suspension in both cars, with H&R lowering springs fitted to Chris’ 2010 and H&R coil-overs in Alex’ 2014. The effect on ride quality and everyday drivability in either car is similar. On poor urban pavement, they crash and bang a bit more over potholes and expansion joints, but neither setup has massively impacted the S5’s well-balanced ride quality. Given that its original remit was grand touring, that’s important – and it’s nice to know you can make the car look more aggressive while still retaining a modicum of comfort. Alex’ car has been lowered even more aggressively than Chris’ car, meaning steep driveways pose a bit more of a challenge, but the advantage of a coil-over setup is that the ride higher is adjustable, allowing you to make your own compromise between visual awesomeness and splitter-scraping.

From a handling standpoint, the newer car definitely has an advantage, for a couple of reasons. First, it’s lighter on its feet, feeling less front-heavy than the V8 car, meaning it turns in more keenly; there’s no initial hesitation when you first twist the wheel, and it can hold a tighter line at higher speeds around bends. The facelifted Audi also comes with the company’s Drive Select feature, which lets you adjust the engine’s throttle response, the behaviour of the electronically-controlled sport differential, and the weight of the steering, meaning that you can set it up according to your own driving style instead of adapting to its own (you can adjust the exhaust note too). If you’re going to be tackling a winding, undulating road in the country, the V6 is definitely the car you want to be in.

Chris’ car has none of this adjustability, and not only does it feel a bit lumpier around town, but you can sense the weight of the engine up front as you circle on-ramps and tackle bends at speed. That said, it’s still a great car to drive, with light but accurate steering, terrific brakes (AP racing calipers grace his front axle, while Alex’ car has the stock setup), and the confidence-inspiring feel that only a powerful car with sticky tires and all-wheel drive can generate.

And that engine. While Alex’ car is fitted with an AWE tuning exhaust that significantly ups the aural drama delivered by Audi’s supercharged six – it crackles when you blip the throttle for downshifts through the six-speed manual box, and has an aggressive bark as you close in on the redline – it still lacks the low-down rumble and the charisma that the big, naturally-aspirated V8 in Chris’ car delivers. Forget the 7-hp difference between the two cars, which is academic on the road; the V8 just feels faster and more flexible no matter where in the rev range you are, snatching it from a standstill through first gear so quickly you almost bump into the rev limiter before you can grab second, and responding aggressively to every twitch of the throttle at higher speeds. The sound is terrific, too. Fitted with a Stasis exhaust that can be a little too resonant at around-town speeds, it has a glorious baritone in the midrange that builds to a full-bodied bellow towards redline. A short-shift kit fitted to the six-speed gearbox (the S5’s is already one of the most fluid and accurate on the market) just adds to the fun.

So which is the better car? That’s a tough call. On an objective level, the 2014 S5, with its supercharged six, walks it. It’s just as fast, it’s better around corners, it uses less fuel, and offers adjustments that let it adapt to the driver’s own preferences. That’s before you factor in four years’ worth of technology improvements in the interior, which lets you stream Bluetooth audio, and has a much-updated, and much better, interface for its MMI. All that said, the S5 was developed from the start to be a superb grand touring machine, and a powerful V8 was an integral part of its original specification; the 2010 car may lack some of the 2014’s niceties, but its power delivery, effortlessness, and even the feeling of substance that’s a result of the extra weight it’s carrying make it feel like it’s from a class above. Two more cylinders, but ten times the character.

Of course, you can’t get a new V8-powered S5 anymore – and they’re hot commodities on the used-car market. Which is why it’s nice to know that Pfaff Tuning can hook you up with performance bits that give the current S5, which is a pretty spectacular car in its own right, that attitude and aural signature that you might be craving.