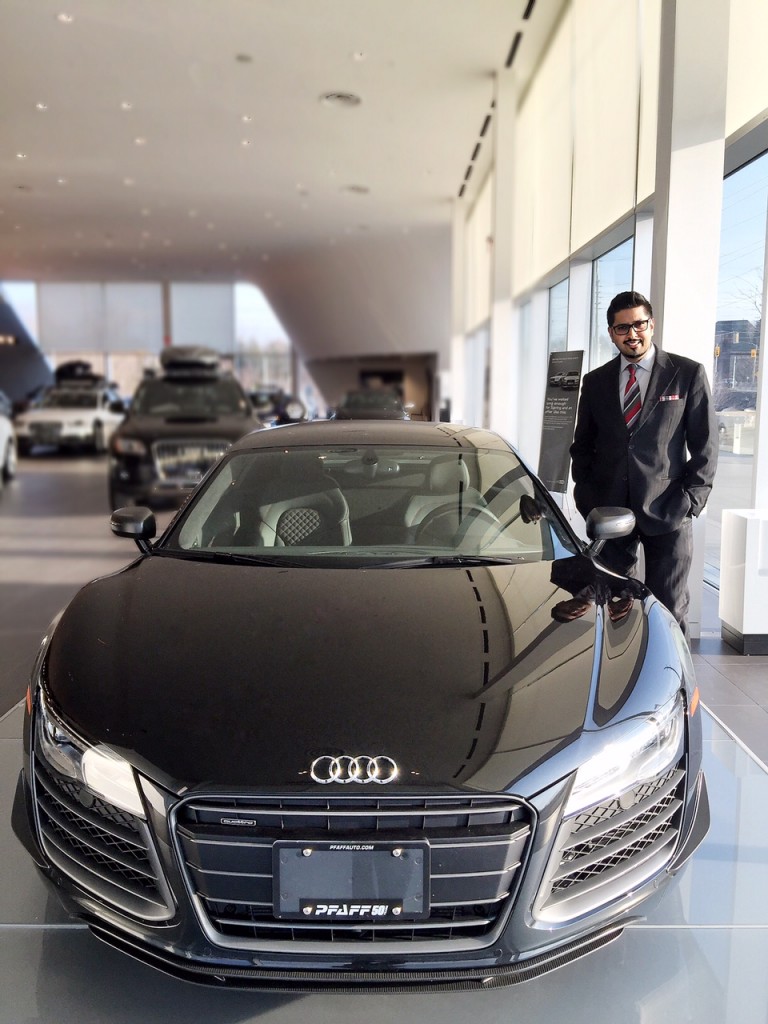 Does Shehan Wicks look familiar? He might be, if you’re into jewellery, or if you’ve ever binge-watched The Shopping Channel (haven’t well all?). The Audi Brand Ambassador, who has been with the Pfaff group since 2009, is also a familiar presence on television, where he has been known to do 12-hour marathons, and where he represents Canadian jewellers.

Shehan’s eclectic background is in jewellery, and his path to selling Audis is an interesting one. He studied fashion design at Ryserson University, and had a long commute that involved parking his car at a GO train station at Yorkdale Mall. The only way to be able to park for free at the mall was to be employed there – which is how he found himself working at Birks. The management there, knowing of his fashion background and his illustration abilities, started him designing jewellery, something at which he proved to be very successful. He designed a line for the 1996 Atlanta Olympics, and won the De Beers diamond competition.

His reputation grew quickly, to the point where custom design houses were employing him, and he was attending design shows across the country. The Shopping Channel followed soon after, and in 1997 and 1998, his own designs were outselling all others on the channel – until September 11, 2001. The entire jewellery industry took a big hit on that date, as numerous jewellery suppliers were headquartered in the twin towers. A desire to do something different followed, and Shehan found himself in the automobile business.

If it seems a strange leap to go from selling jewellery to selling Cadillacs (Shehan’s first job in the business), it shouldn’t. The first dealership he worked for swore that they would never hire anyone from outside, until they met him, and realized that the skills for dealing with high-end clientele were very similar: a thorough assessment of the client’s needs, unwavering attention throughout the process, and a focus on always delivering the best experience, no matter what the cost or effort.

When General Motors took a hit in the 2008 and 2009, Pfaff, and Audi, beckoned. “It was an easy transition for me. The product was innovative and sporty, and there was something new every year to learn about. The quality of the cars is terrific. The first Audi I owned was actually a pre-owned A8, which I drove for years trouble-free; I have an fully-loaded A5 with an S-Line package and my wife drives an A4. The cars treat their owners as well as I try and treat them.”

He feels like he’s well-treated by the company and his colleagues as well.

“Everyone here, from porters all the way up, loves their job,” he says. “Everyone goes above and beyond. It’s no surprise to anyone that works here that we won the award from Automotive News for being one of the best dealerships to work at. The company does a lot for its employees, and it does a lot for the community. I had so much fun attending the Newmarket Home Show recently; everyone in the community knows Pfaff, and loves us.”

It’s a love fostered by a reputation for going above and beyond customer expectations. “The story I love to tell is of one of my customers whose child was ill and who was downtown at Sick Kids hospital in downtown Toronto; we valeted a loaner car out to her, brought her car in for service, and then valeted it back. Even though the car we left her barely left the hospital’s parking lot, she was so appreciative of what we did for her, that we went the extra mile. Everyone here takes such pride in their work.”

That pride is clearly visible every moment you speak with Shehan, who also happens to look after the store’s social media presence. “Let’s just say I plan to retire here.”