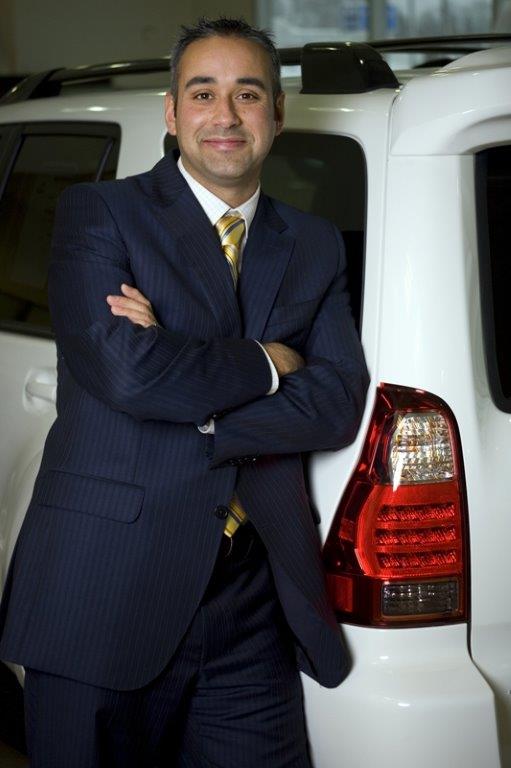 Dependability. Consistency. Evolution over revolution. There are a lot of parallels between Chris Lee’s career and the Toyotas that he loves.

“Looking into my past in the automotive industry,” he says, “I’ve seen it all. Whether it was working at the service desk at Canadian Tire, working in a factory making seats, or being a salesperson at a Chev/Olds dealership before I came to Toyota, I’ve learned that Toyotas are cars I can recommend and sell with confidence. I can get a good friend or his father into a Toyota and I’m sure they’re getting a good car. And while issues certainly come up every once in a while, we’re good at dealing with them up front. The cars are inherently conservative – which means you might not get the latest or most exciting features right away – but they’re dependable, and you know you can rely on them.”

If you’re into automotive stereotypes, you’d be tempted to say that Chris would understand reliability, or a lack of it, better than most. His father moved from the UK to Canada as a mechanic in 1977, and brought his family to Brampton in 1978. After a brief return to England, the family came back to Canada in 1982, where his father was employed at the local Volvo dealer, and subsequently established a business called Euro-Brit Motors, which specialized in servicing and repairing British Leyland models. Says Chris: “I grew up around MGs, and my dad always had a parade of TR7 owners at his door. Selling used Toyotas, which basically sell themselves, is such a contrast.”

“I realized early on that I wanted to be around cars; with some people, it’s kind of in your blood. When I was in school, I worked at Canadian Tire, and during the summer, I used to ride with my dad to the dealership, where he would fix cars and I would wash them. Three out of five nights during the week – this was back before safety regulations were as stringent as they are now – we’d stop at people’s houses and do brake jobs in their driveways. I got into parts delivery, and I worked at the Johnson Controls factory, which made seats for Chrysler and Toyota products; they actually made Corolla seats on our line.”

While he’s spent almost all of his life in the automotive field – he was a salesperson at a Chevrolet/Oldsmobile dealership, and his first job at Hallmark Toyota was as a used car specialist, buying cars, doing trade appraisals, and selling – it’s actually the jobs he’s held briefly outside of the business that give you the most insight into how Chris likes to deal with his customers. When he was still in school, he wanted to get into medicine, and worked at a hospital, and worked as an assistant for a pathologist. “I love cars, but as much as that, I always loved being around people.”

Chris has been at Hallmark Toyota for 16 years now. For almost 15 of those, he’s been the dealership’s sales manager. In that time, he’s gradually ushered in numerous changes to make the store run more smoothly, and its customers’ experience more positive. From day one, he worked to integrate new technological tools, enabling faster and more accurate quoting, sales, follow-up and service. “I made sure that, as we introduced these tools, everybody at the dealership got to understand the systems well – and more importantly, why we were using them.”

Indeed, the technical improvements that Chris has implemented successfully at Hallmark Toyota have meant that plenty of opportunities within the Pfaff automotive group have presented themselves, but he’s consciously chosen to stay at Hallmark, and nurture his deep roots in the community that he chooses to call home.

“I enjoy what I do,” he says, “and I love the people I work with. Like all of us that work here, I’m very lucky to make a good living in this town, to be so close to home, my wife, and my three children. Both in my family and professional life, being here, in this community, means I can deal with any issues faster, and I can develop deeper relationships.”