BMW 328d xDrive is a diesel that’s born to run 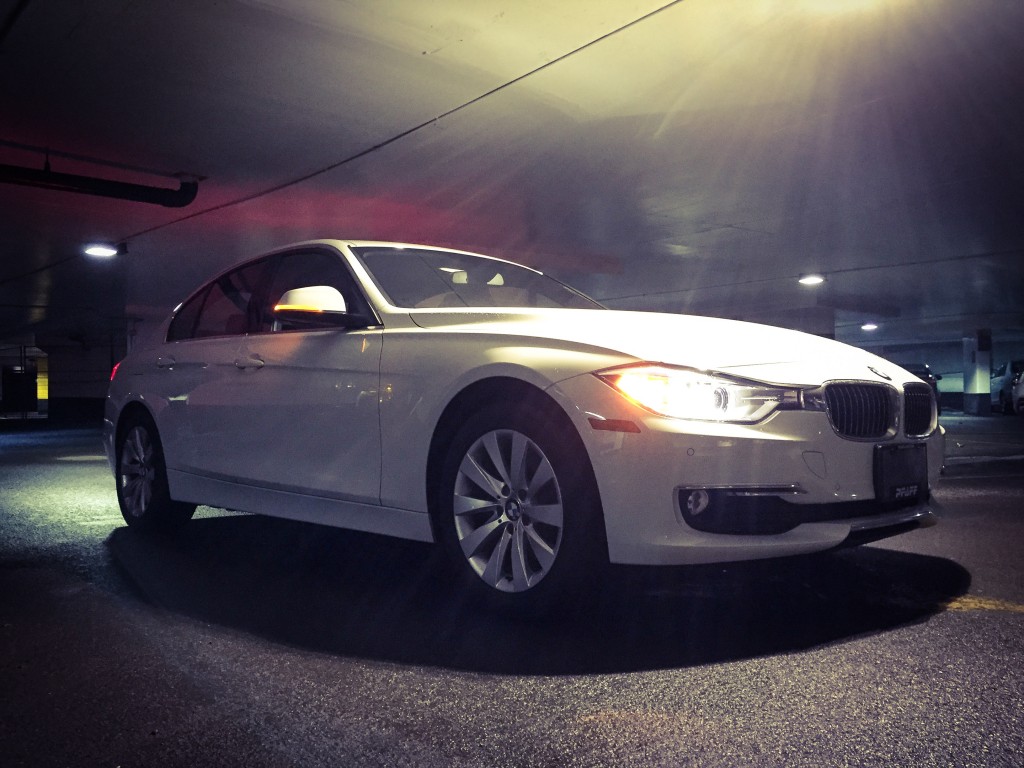 There’s no question, when you start it up, that the BMW 328d is a diesel.

Particularly when cold, it has a deep metallic grumble that is quite unlike anything you’ve used to, if you grew up in love with the creamy sounds made by BMW inline-sixes. It’s less refined than the similarly-sized 2.0-litre turbocharged four you’d find in an Audi, but that’s okay. For you quickly discover, as you pull away from your first set of lights, that ample compensation comes in the form of a stout 280 lb-ft of torque, delivered powerfully through the eight-speed ZF automatic to all four wheels. Once you’ve set off, the grumbling fades away, overlaid by amusing amounts of turbocharged whooshes and whistles.

On the open road, it feels like a big-displacement V8, with no turbo lag and instantaneous throttle response. Even better, unlike most diesels, this one loves to rev, and doesn’t run out of breath as the tach swings to the right. It’s so responsive (I’d even call it “zippy,” not a word you’d normally apply to a diesel) that the transmission’s sport mode really is redundant, as it doesn’t make the car feel any swifter as it artificially hangs on to gears for longer. In town, an automatic start/stop function as well as a selectable “eco pro” mode minimize consumption while you’re creeping along, and you quickly get used to the engine shutting off at stoplights, restarting the moment you lift your foot off the brake pedal.

A relatively lightly-optioned car, with just the $3,000 executive package (comfort access, automatic dimming mirrors, park distance control, and some other goodies) on top of the $48,000 base price, my 328d’s black interior lacked a fancy paddle-shift steering wheel and sport seats, but the fundamentals were oh-so right. While the standard seats look a little bit flat, they’re terrifically supportive and finding a perfect driving position is easy. All of the controls are exactly where you expect and want them to be, and build quality is exceptional – while BMW’s interiors may not be the flashiest in the business, these days, I actually think they’re the best-built, with durable, attractive materials everywhere you look and touch, and a simple logic that makes them easier to use than any other German brand’s. 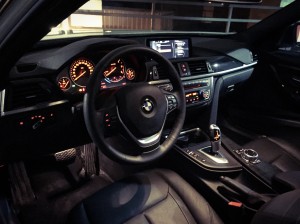 Particular mention needs to be made of the iDrive, which integrates controls for the standard navigation system, radio, telephone and other entertainment options. Once the most difficult system on the market to set up and use, iDrive has evolved into a model of clarity and is easily the best in the business for the clarity of its widescreen display, the ease with which you can access all the functions, and the fact that there are still hard controls for volume, radio presets, and skipping tracks. It’s those last three items – and the fact that the climate controls remain entirely separate – that make iDrive such a cinch to use, even if it results in a little more dashboard clutter.

The “F30”-generation 3 Series, like this 328d, pulls off the impressive trick of being both bigger and lighter than the “E90” that it replaces. For a car with this footprint, it’s amazing how much useful space BMW has managed to find inside, thanks to clever packaging and the sculpting of the door panels, seats, console and other interior fittings. Unlike a lot of cars, for example, the dashboard is compact, the distance from the base of the windshield to the instrument panel not hugely exaggerated for the sake of rakish styling; the door panels are noticeably scooped out to provide more elbow room. 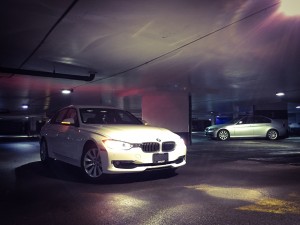 Less weight, though, means that the 3 does an excellent job of masking its extra size. Steering, throttle, brakes, and, should you choose to slap the electronic console around, shifting, are instantly responsive – not sports-car like, but very much at the sporty end of the sedan spectrum. And there’s nothing quite like the inherently balanced cornering that BMW’s fastidious 50/50 weight distribution and rear-biased all-wheel drive deliver when you swing into a corner. It moves all of a piece, it corners flat and stable, and you always find yourself motoring along faster than everyone else because you’re having such fun.

And that’s the thing about the 3 Series. No matter which engine you choose – base 320i, fire-breathing M3, any of the choices in between – or how much money you choose to spend, you’re still getting the full BMW experience, and every moment behind the wheel is still infused with that uniquely subtle magic that turns even mundane drives into uplifting ones. The difference is, with this torquey, thrusty, economical diesel, you’re going that much longer between fill-ups.