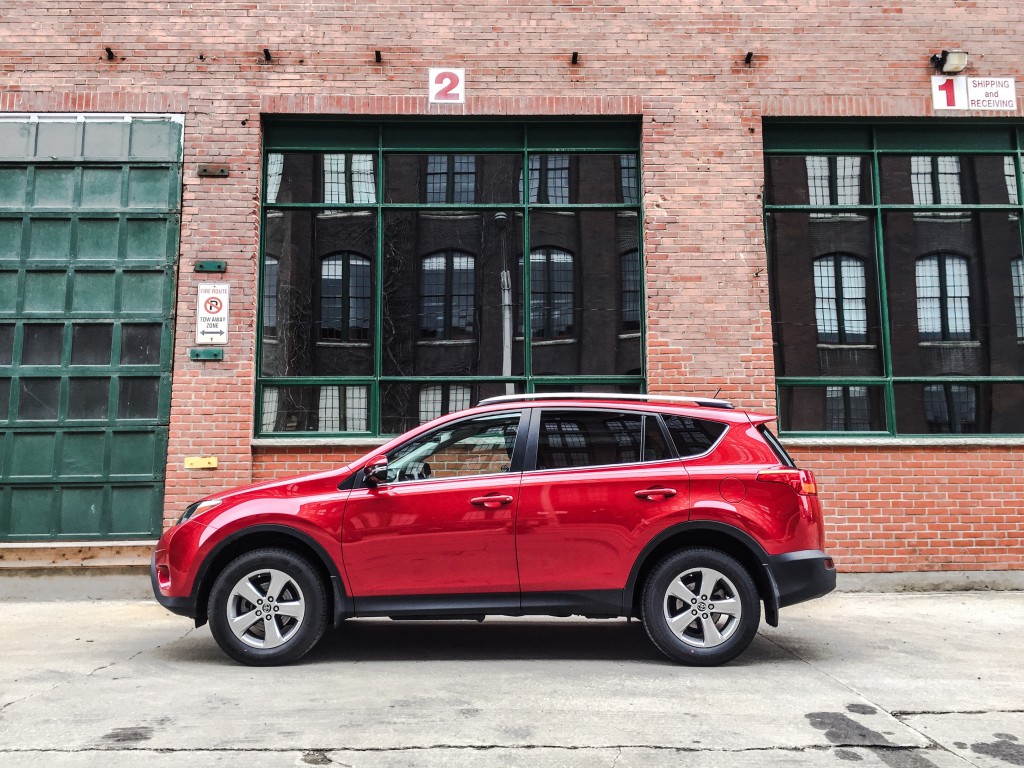 I grew up being a snob about cars. Having spent more than a decade reviewing high-end automobiles, and then another few years working at a premium German car brand, how could I have turned out otherwise? Over the years, I became accustomed to thinking that if you wanted the latest features, the highest technology, and the best performance, you had to go European, and you probably had to go German. A couple of shagged rental cars aside, the last time I drove something truly mainstream was almost 10 years ago.

What an eye-opener, then, to spend a few days behind the wheel of a 2015 RAV4, about as mainstream an automobile as you’re likely to find these days. While it didn’t have a fancy-pants badge on the front, boy, it was packed with features. Features that, only a couple of years ago, we were making a really big deal about on cars costing three times as much.

Stickering at $30,900, for instance, my Barcelona Red RAV4 XLE with all-wheel drive had, in no particular order: a swift-shifting six-speed automatic transmission; power windows, mirrors, and locks; a fast-acting touch-screen infotainment system with USB and auxiliary inputs, Bluetooth streaming, and back-up camera; a power liftgate; and a set of sporty front bucket seats that wouldn’t be out of place in a BMW or a Porsche. Unlike those fancy-pants German brands, all these features are pretty easy to use as well. There’s no complicated controller to learn how to use, and the menu choices on the 6.1-inch touch screen are big, clear, and easy to figure out. Climate controls remain separate from infotainment, meaning it’s super easy to dial in changes of temperature, fan speed, and seat heat.

What you do give up a bit versus the prestige brands is that sense of integration, that everything speaks to everything else. As an example, there’s an “eco” function on the touchscreen that lets you plot out your fuel consumption over time (it goes hand in hand with the eco mode for the transmission), but average and instantaneous fuel consumption readouts are only available in the LCD display at the bottom of the speedometer. And the positioning of some of the various controls can seem a little scattershot: the transmission’s sport function nestles in right beside the seat heater switches, while the control to switch off the traction control is on the other side of the steering wheel. (The window switches aren’t backlit either, something that I thought Toyota stopped doing years ago.)

There’s no questioning the ruggedness of the interior fittings, though. While the matte-finish faux carbon isn’t actually convincing, it’s attractive and hard-wearing; like everything from the seat fabrics to the door panels, it feels like it will last forever. Even the leather that wraps the steering wheel and shifter, and even parts of the dash (you pay extra for contrasting stitching on most German cars, you know) has a tough, easy-clean texture that is kid-friendly while offering a surprising touch of luxury. Storage bins are both numerous and practically-shaped, with perfect spaces for your gloves, change, cell phone, audio player, and other items.

More important about the RAV’s interior is how friendly it will be for your family and your gear. Used as a commuter car, it’s easy to get in and out of, with a perfect step-in height, doors that open nice and wide, and good sightlines. The relationship between the rear door and the back seat make loading baby seats a cinch, and the relatively low window line means baby will have a great view out. (If you’re hauling full-sized passengers in the back, they’ll appreciate that the rear seats recline.) Should your RAV4 activities tend more toward the active side of things, it’s simple to flop the seats forward and create tons of extra room for your gear. The rear bench splits and folds flat, opening up 2,080 litres’ worth of cargo space in an instant. That space is much easier to get to now, as well, thanks to a conventional tailgate instead of the old RAV’s side-swinging rear, which was tough to use in tight spots. 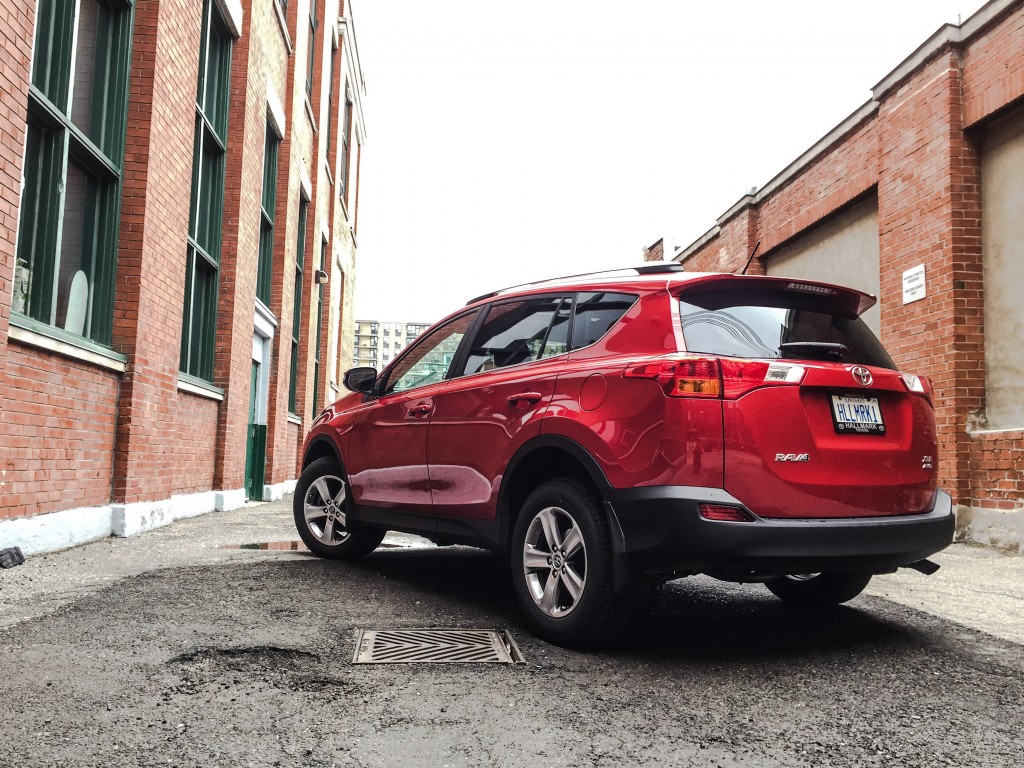 The RAV’s only engine choice is a 2.5-litre four-cylinder, which pumps out a more-than-adequate 176 horsepower. Thanks to a tightly-stacked first three gears, it hauls this truck around with authority in the city, and is smooth and refined (if not actually that quiet) in typical Toyota fashion. At speed on the freeway, taller gear ratios mean that it settles down quite a bit, making long cruises and country-road drives more pleasurable (and giving you time to enjoy the surprisingly good sound from the six-speaker audio system). Wind and road noise are both well-controlled, and while the ride is a little bobbly over low-speed bumps, it smoothes out the faster you go. The steering is quick and precise, and handling is confident, with very little head-tossing in quick transitions. The brakes work just fine, too, though the pedal feels a little soft in the first couple of inches of its travel.

While it would be a stretch to call the RAV actually sporty, its handy size (not too big, not too small), good forward visibility, terrific seats, meaty three-spoke wheel and easy controls do mean that it’s a pleasure to drive, whether you’re slogging back and forth between work and home and hockey practice, or in a little bit of a rush on a winding road. It handles everything you throw at it without complaint, and will never surprise you or let you down. 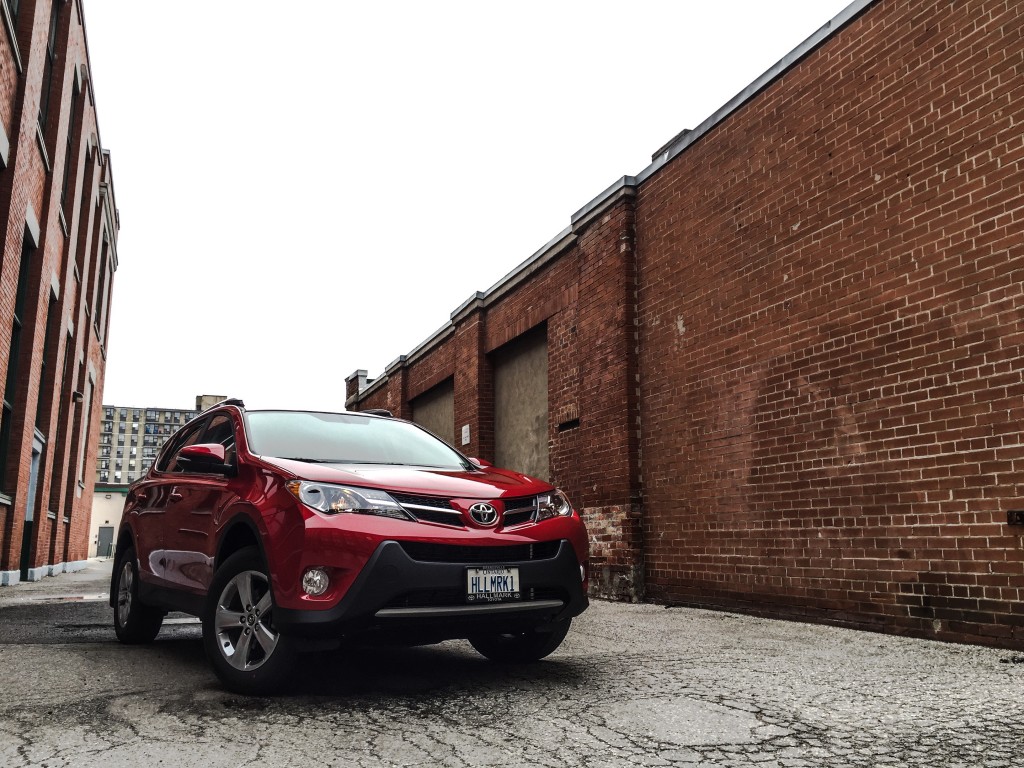 It is, then, like all Toyotas: there’s not a lot of flash on the surface, no whiz-bang features that will bait mega car-geeks. But underneath that unassuming exterior lies a car with a lot of fundamental substance. While it may not make you fizz with excitement after the first few minutes behind the wheel, conversely you’ll still be smiling every time you get into it several years down the road.