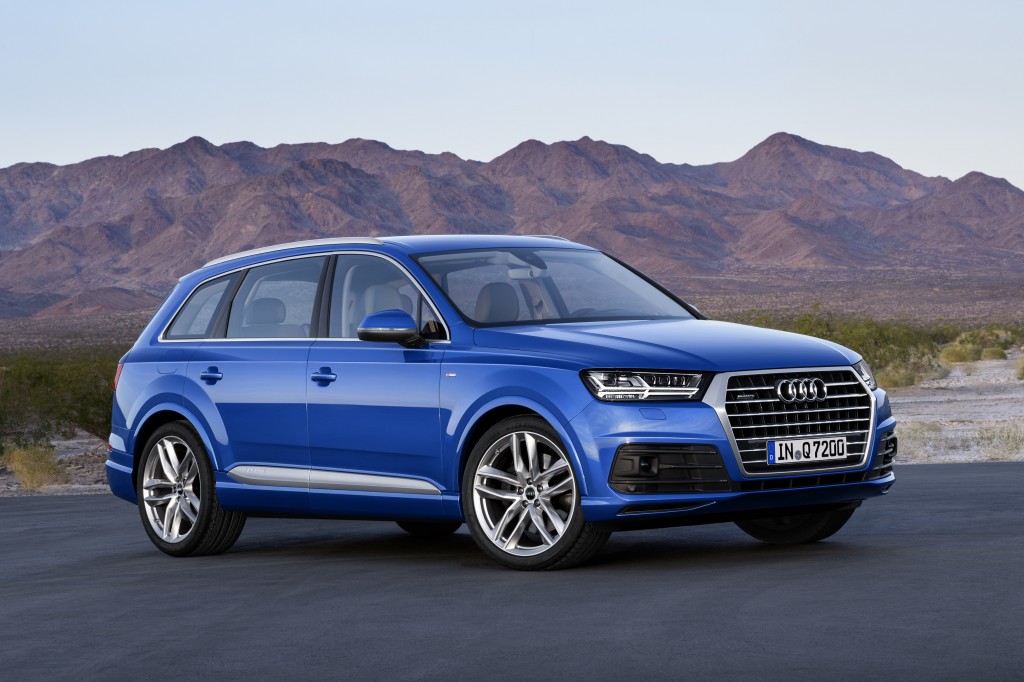 At the Detroit auto show earlier this year, Audi launched the new Q7. The second generation of the large, seven-seat SUV, the new Q7 ups the ante over its successful predecessor with innovative technology that permeates its drivetrain, chassis, driver assistance systems and infotainment. Up to 325 kg lighter than its predecessor, the new Q7 is built around a new, lightweight architecture, significantly reducing CO2 emissions and fuel consumption.

With a curb weight of just 1,995 kg (as a 3.0 TDI), the new Q7 is the lightest in its class. With its lightweight, multi-material body and an all-new chassis, it is comfortable and more spacious, while at the same time offering the typical performance of a sporty Audi. Ultra-high-strength parts made of hot-shaped steel form the backbone of the occupant cell. Aluminum castings, extruded sections, and panels are used in the front and rear as well as the superstructure; they account for 41 percent of the body structure. 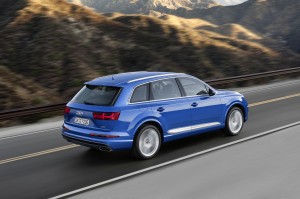 New, more dynamic proportions signal the new Q7’s renewed sportiness. It is actually 37 mm shorter and 15 mm narrower than before, for better drivability in town. Inside, however, the new design has liberated more space, with an additional 21 mm between the first and second rows of seats, and more headroom in all three rows of seats.

The design of the new Q7 is edgier and more aggressive than before, with blisters above the wheels that pay subtle homage to the classic quattro. Up front, the single-frame grille features thick crossbars and a bright outline. The headlights feature either xenon, LED or Matrix LED technology; the daytime running lights are shaped like a double arrow, similar to the new TT and R8. A trim strip along the side of the new Q7 comes standard with a silver paint finish, but can be ordered in body colour for a custom look.

Our favourite aspect of the new Q7, however, is its interior. A new, wrap-around design running from the doors through the instrument panel gives a feeling of protection, while offering a great forward view. The centre console and all of the lines of the air vents and dashboard trim point to the instrument cluster, further reinforcing the driver orientation. Ultra-narrow light guides follow the contours on the instrument panel and in the doors.

While the new Q7’s MMI controller is familiar, it now has force-feedback and operates a system that has been significantly revised to combine the latest infotainment, connectivity and driver assistance systems. The second-generation modular infotainment platform combines for the first time in the Q7 with the Audi virtual cockpit, which replaces conventional instruments with a large, high-resolution screen that can show virtual instruments, a giant navigation map, or other information, with exceptional clarity. Other options include the Audi tablet for rear-seat passengers and the two sound systems with 3D audio. Smartphone integration with Google Android Auto and Apple CarPlay is also new. 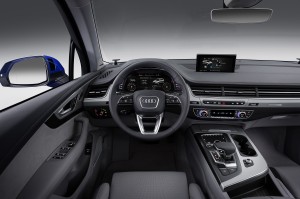 Standard driver assistance systems include rear park assist and the Audi pre sense city system, which warns the driver of impending collisions with other vehicles or pedestrians and will initiate heavy braking in an emergency. Optional features include 360-degree cameras, autonomous parking, lane departure warning, and event a trailer towing assistant.

The new Audi Q7 rolls on an updated steel suspension, with adaptive air suspension available as a option. The air suspension is managed by a new vehicle control unit that manages all body control systems, and can lower the body by as much as 30 mm at high speeds, or raise it by 60 mm when off-road. Standard Audi drive select works together with the air suspension to offer seven modes, also adjusting the transmission, steering, and engine characteristics.

First Canadian deliveries of the new Q7 will be at the end of 2015. Check here often for more details as we learn of them! 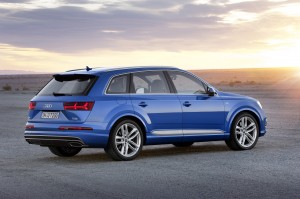