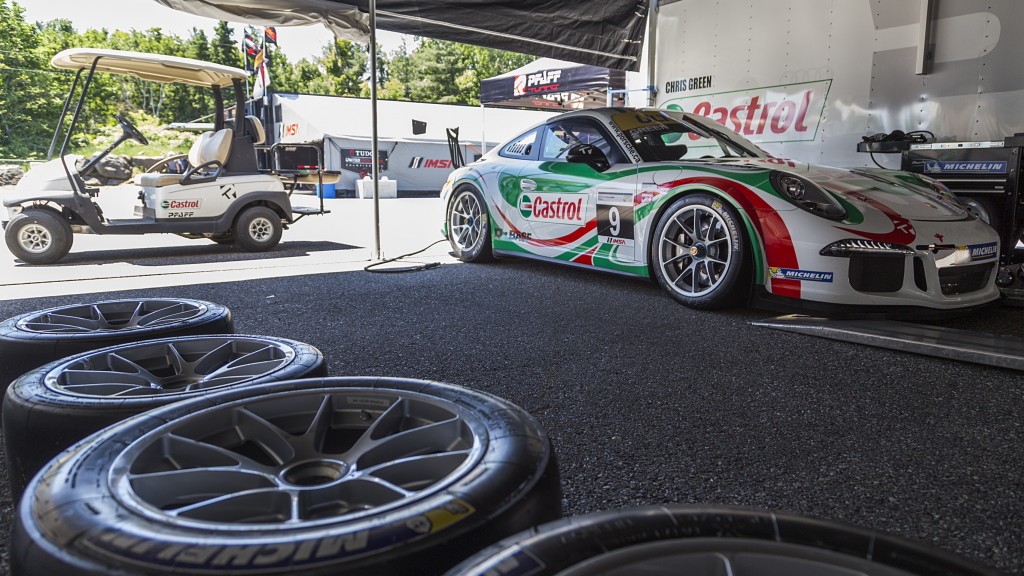 This past weekend saw rounds 3 & 4 of the Porsche GT3 Cup Canada series take place at Calabogie Motorsports Park close to Ottawa. The newly formed Pfaff Motorsports Team headed into the weekend with a 4-point deficit in the overall championship to Open Road Racing’s car driven by Scott Hargrove, setting the stage for an intense weekend of racing between two talented drivers & motivated teams. However, the weekend got off to a slow start, as all the teams were forced to wait until 5pm on Thursday before they were allowed to move into their pit areas to set up as the people who had rented the track that day were in the pit area assigned to the GT3 Cup Teams. So with a full day to kill, each team was forced to find ways to pass time in one of the most beautiful areas of the country. What did Pfaff Motorsports do to pass the time you ask? We took the opportunity to do some team bonding, and decided to spend our day by the water trying our hand at canoeing. Let’s just say Pfaff Motorsports should stick to preparing fast race cars, as we failed miserably at canoeing (see photo below).

After swallowing our Canadian pride, we headed to the track to setup our pit area and focus on the task at hand. Through the 4 rounds of practice before qualifying, it was obvious that it would be a 3 car battle all weekend between Green, Hargrove, and Pigot. Qualifying started late in the day on Saturday, and unfortunately for Chris Green and the #9 Pfaff Castrol BASF Motorsports team, the qualifying results weren’t as we had anticipated, and ended up qualifying 3rd for the first race on Sunday.

Our qualifying result was virtually a blessing in disguise, as this made Green pretty ticked off, and when Chris is mad…he’s fast!! From the drop of the green flag, he made quick work of Pigot in the first corner, and overtook him to take 2nd place. At that point, it was game on, and Chris Green put on a show for the fans in attendance as he ran down Hargrove to challenge for the lead. A caution flag was flown for debris at the midpoint of the race, and on the ensuing restart, Chris made his move for the lead entering turn 1 and completed the pass on Hargrove, much to the delight of our Pfaff Motorsports crew watching from pit wall. From that point, Chris checked out, and put his #9 car out front by about 5 seconds before a heavy crash from one of the Gold class cars caused the race to end under caution. With Green flashing the high beams, and running tight to the pit wall to share his excitement with his crew, he took the checkered flag while the crew celebrated on pit wall!! Just like that, Pfaff Motorsports claimed their first GT3 Cup Challenge Canada victory as a fully independent team!

The excitement was short lived however, as Mo, Steve, Nick, Jimmy, and Joe were forced to get back to work on the car to prepare it for the second race of the weekend where our #9 car would start from 2nd place behind the #69 Open Road Racing car. When the green flag flew, the field spread out, with Chris holding on to 2nd place through the first set of corners. About 5min into the race, Chris started closing in on Hargrove, and the race was shaping up to be another nail biter!! With a caution free race, the handling on the #9 Pfaff Castrol Motorsports car started to go away, and Chris made a very smart decision to protect the car and salvage a strong 2nd place showing, and avoid any possible failures from the worn out tires.

So the Pfaff Castrol Motorsports team left the weekend with the same 4-point deficit it entered the weekend with, and still very much within striking distance for the overall championship lead. Chris Green & the Pfaff Castrol Motorsports team head to the Honda Indy Toronto in a few weeks for races 5 & 6 of the Porsche GT3 Cup Challenge Canada, where we look to have another strong showing in front of the home-town crowd!